Share All sharing options for: Avs start camp, minus some old friends

Another too short NHL offseason is over. Colorado players are reporting to camp today and will begin practicing tomorrow. While the Avs have several young players to get excited about (Woljtek Wolski and Brad Richarson are probably the two biggest), it's also a time to reflect on some Avs favorites from years past who have since moved on.

First up is goalie David Aebischer, traded last year at the deadline for Jose Theodore. Aebischer had the unenviable task of following in the footsteps of Patrick Roy. Many players would have buckled under that pressure, but Aebischer put in a solid season (2.09 GAA and 32 wins) in his first year as the number 1. In the playoffs, Aebischer was stellar in round one against the Stars, then had some shaky games against San Jose in the second round. After the Avs fell down 2-0, Aebischer stepped up his game. Colorado lost game 3, but not because of Aebischer - they we're shutout 1-0. Then came the thrilling 1-0 shutout overtime win, and another OT win (2-1) to pull Colorado back into the series. Aebischer allowed just 2 goals in those 3 games. The Avs would lose game 6 to get sent to the golf course, but without Aebischer's play, the series would never have been extended.

And then came last year. Like many goalies, Aebsicher seemed to struggle to find his game after the lockout. Colorado's very poor defensive play in the early part of the season didn't help, but Aebischer no longer looked like a goalie who could win games on his own - a must for a team with Cup aspirations. When he was benched and sometimes scratched as part of a threeway rotation towards the end of 2005, it seemed clear Abby's days in Colorado were numbered. Rumors of his pending trade continued, even after he picked up the game in the months leading up to the draft, and on March 8th, he was finally traded straight up to the Canadians for Jose Theodore. The Canadians got a solid goalie while shaving millions off their cap. Colorado got a goalie with a high level of volatility - Theodore could be great...or $5 million of wasted cap space. As of right now, I think Montreal got the better part of that deal. 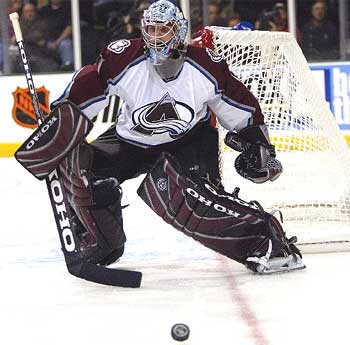 Tomorrow, a guy that probably won't be booed in LA anymore.