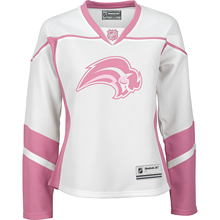 The Sabres finally released their new jerseys on Saturday. And no, the one on the right is not something you'll see on the ice; just another of the silly chick jerseys that have become all the rage.

Years ago, as an impressionable youth, I went to my first concert: Corey Hart (Katrina & the Waves was the opening act). I would estimate that every third female in attendance that night had on a pink frilly halter top that said "I had sex with Corey Hart". For some reason, I've always associated the pink hats and jerseys with those tacky half-shirts. 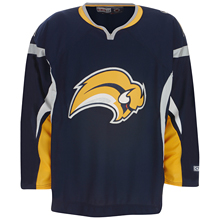