In the 1998 entry draft, Colorado had a whopping 6 of the first 38 picks. A few - Martin Skoula, Scott Parker, Phil Suave - spent some time with the Avs (the first two were on the last Cup team). Robyn Reghr was part of the Theo Fleury trade. Ramzi Abid never signed, and ended up re-entering the draft two years later. The sixth player? That would be the topic of the final farewell entry - 12th overall pick Alex Tanguay.

Sandwiched between picks of current NHL superstars Jeff Heerema and Michael Henrich (ok, actually the two have combined for 6 points in the NHL), Tanguay had high expectations almost right off the bat. Tanguay had a strong preseason, and there was talk he'd make the team, but was ultimately sent back to his junior team - a move similar to Wojtek Wolski last year. He made the team the following season, notching an assist in his first game and a goal in his third on his way to 51 points, 2nd to Scott Gomez among NHL rookies. Tanguay scored 77 the following season, cementing his place as one of Colorado's top forwards. In the playoffs, Tanguay added 21 more points, including two goals in the 7th game of the finals, as Colorado won their second Stanley Cup. 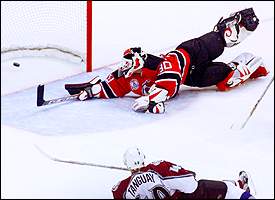 In his seven years in Denver, Alex Tanguay has always been exciting to watch. Sometimes it was because he tried to make a too-fancy play leading to a turnover, but usually it was just for his immeasurable offensive skills. It was always a bit maddening that Tanguay never seemed to be able to take his game that one slight notch to the final level - he has yet to crack the 80-point barrier, and you can't really say he's been held back by poor teams. He would look amazing some nights, ordinary on other nights. But man, those nights he was "on"? Electrifying. Even with a bit of underachieving and some inconsistency, Alex Tanguay is, hands down, my second favorite Avalanche of all time (you get 19 guesses as to who my favorite is).

Now, I'm not one to get too emotional over my favorite players leaving my favorite teams. I survived Tony Dorsett going to Denver, Drew Bledsoe going to Buffalo, and I'm okay with seeing Peter Forsberg with that goofy winged "P" on his chest every night. But back on June 24th, when I decided to turn on the draft to see which guy I'd never heard of had been taken by the Avalanche, I was stunned. I even let out a little gasp, prompting my wife to ask if someone famous had died. At first, I thought the ticker announcing the trade of Tanguay to the Flames for Jordan Leopold was a mistake. No amount of denial was going to reverse this one, though. Tanguay and his 400 NHL points were gone. Colorado's 9th all-time scorer has gone to a division rival.

I like Leopold. Colorado needs a solid defenseman, and he seems to fit that bill. I know nothing about Codey Burki - one of two draft picks acquired from Calgary. Maybe he'll be the next Jose Theodore or Patrick Elias...or maybe he'll be the next Deron Quint. All I know is that a player I really, really enjoyed watching is gone. And that's hard to come to terms with.