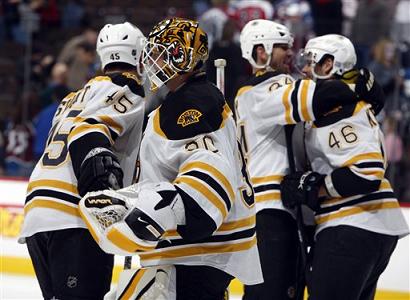 The Avalanche put up a good fight, but out-of-place defense and some shaky goaltending allowed the Boston Bruins to stay in the game and win it in the end, 5-4.

Tim Thomas stopped 35 of 39 shots, while Peter Budaj managed just 15 saves out of 20 shots.  Budaj wasn't at the same form he enjoyed during the pre-season, and he didn't have much help from the Avalanche defense, either.

One thing is for sure, when Coach Tony Granato said the Avs would be playing with a fast-attack, speed-oriented game, he wasn't kidding.  Gone is the old dump-and-chase of the Coach Quenneville era.  The Avs repeatedly skated the puck into the opposing zone with a clear purpose, and found their positions and made their passes with little trouble all night.  They cycled well.  They attacked the net instead of dropping below it and praying for a lucky bounce.  Ten Avalanche players had at least one point, with goals scored by Milan Hejduk, Jordan Leopold, Wojtek Wolski and Cody McLeod. The defense was heavily involved, too, moving the puck well at the back of the zone and putting good shots on net.

Unfortunately, in their own end, the defense looked soft.  They didn't physically challenge the attack like they did at the end of last season.  On at least two goals they were caught standing around.  Even Adam Foote looked on as Marc Savard redirected a Zdeno Chara slap shot past Budaj, with Foote making no effort to pressure the crease-crowding Savard.  On the final goal of the night, David Krejci was left open by Jordan Leopold and managed an opposite-post wrist shot that Budaj---though pressed against the near post as he should have been---couldn't stop.

But hey, it's just the first game of the season.  Regardless of the result, it was fun to watch.  The Avs were attacking and playing well together and were in the game from start to finish.  Not once did they appear to let up and back off.  I quit caring who won at one point, just because it was so fun to watch.  The stress and frustration of last season seems to be gone altogether.

But, like I said, it's just the first game of the season...

ADDENDUM: Maybe this isn't abundantly clear to everyone, but it's pretty silly to draw any conclusions about the ability of a starting goalie after one performance.  Guess what, kids, Budaj is going to lose games.  He's going to lose a bunch of them.  If he starts 50 games and loses less than 20, it will be quite an accomplishment.  Patrick Roy---as if he's a valid comparison anyway---lost 20 games or more six times during his career.  Losses happen.  Let's wait to throw the guy down the stairs at least until he's got a few consecutive starts under his belt, okay?  Good god.  Some of you people are worse than Coach Q.

Thanks to everybody for making last night's thread amazing.  More than 400 comments!  Want to know who was the most talkative?  You can now view the stats on the left sidebar after each game!  Woooooooo!