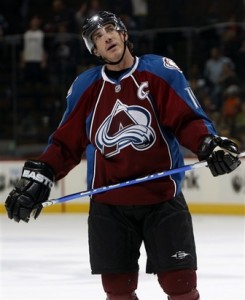 For the most part, the Colorado Avalanche looked to be an improved team over their 2007 selves. Unfortunately, despite dominating many ares of the game, the Avs came up too short in the only category that mattered - the score. Boston took advantage of a late, fluky-bounce goal by David Krejci to spoil the Avs' season opener, 5-4.

Overall, there were a lot of positives to take from the game. The Avs spent long amounts of time in the Boston zone, and at times had the puck so long it more resembled keep away than hockey. Our uniproned warriors seemed to constantly have two or three forwards buzzing around Boston goalie Tim Thomas, and the Avs outshot Boston in every period (and 39-20 in the game). The Avalanche defensemen also joined in the fun, pitching in 4 points and 7 shots. And, while I didn't think our new gritty play was on display as much as some thought it might be, we did outhit the Bruins 34-20.

So, what went wrong?

Honestly, I think you could chalk up most of Boston's goals to lucky bounces or great execution rather than defensive lapses or bad play by Peter Budaj. The Bruins did get some early breakaways, but Budaj came up big to save his teammates' proverbial bacon. Phil Kessel (wearing his trademark shorts with an inseam ripped halfway to his crotch) scored the first Boston goal, and that one - coming when Joe Sakic was forced off the puck in the Avs zone - is really the only "bad" goal the Avs game up. Blake Wheeler took advantage of some gorgeous precision passing by Krejci and Chuck Kobasew to score the 2nd. Marc Savard got a fluky redirection-off-of-a-deflection on the 3rd. Michael Ryder ripped a one-timer from the slot for the 4th. And Krejci's goal came off a missed shot by Kobasew; although Kobasew fanned mightily, the puck moved right to Krejci's wheelhouse. It was the final nail in a coffin full of bad breaks.

The Avalanche powerplay seemed improved last night. The Avalanche converted on their first 5-on-4 of the season (on a great play by Liles and Stastny to set up Hejduk). They also came within about 10 seconds of matching 2007's 5-on-3 output (of 1), but Wojtek Wolski's goal (he centered the 2nd PP unit) came just after 2 Bruin penalties had expired. In less promising news, the Avs first goal came just a few seconds after a big breakaway by Patrice Bergeron, when Liles got forced off the puck along the boards and Sakic was unable to keep Bergeron in check at the point. Sakic had a great game offensively (7 shots) and defensively (63% faceoffs and numerous appearances deep in the zone to help out), but, plain and simple, he is a defensive liability when used on the point. You are going to see more shorthanded breakaways (or penalties to end the powerplay).

Sakic wasn't the only guy coming back to help out. All night long, Avalanche forwards were getting back to help support the D - something that was missing last year. It seemed like any time a defensemen faced some pressure, he was easily able to dump it up the sideboards to a forward coming back to help. Last year, that puck ended up on the stick of the other team. I even noted Tyler Arnason getting back to lend support with 3 minutes to play in the game. Wow!

We didn't win. There was a lot of "try", but not quite enough "do". But this still looks like a team capable of doing a lot of good things this year.

The lines were as had been reported on Wednesday (and, with the exception of Cody McLeod, were identical to the way I would have done it). I was a little nervous early in the 2nd when Tony Granato threw out a line of Tucker, Sakic and Smyth followed quickly by Stastny, Hejduk and Wolski. I'm not really sure why that happened, but they got back on track quickly. Granato even used pairs from the same line on the kill (Lappy and Guite, Hejduk and Stastny) which also helped keep the lines consistent. The first PP unit was Smyth, Stastny, Hejduk, Sakic and Liles. The 2nd unit was intriguing - Wojtek Wolski was at center! The unit was Svatos, Wolski, Tucker, Clark and Salei.

The defensive pairings looked good to me, although Salei and Leopold seemed to be a little confused together on several occasions. Even though Hannan had zero hits, I thought he and Liles were the most physical pair on the night.


The game report can be found here.

I'm a Def Leppard fan. Pyromania was the first, um, cassette I ever bought and I saw them in concert not too long ago. But last night was ridiculous - the band looked old and fat and sounded terrible. Now, I'm also old and fat and can't sing a lick, but you don't see me singing at any pregame shows, do you? And I certainly wouldn't set the fucking Stanley Cup down upside-down on the stage. That was just brutally wrong, in so many ways.

The Avalanche play the Oilers in Edmonton on Sunday.

The Dog and Pony Show