Share All sharing options for: Kopitar Sets the Bar 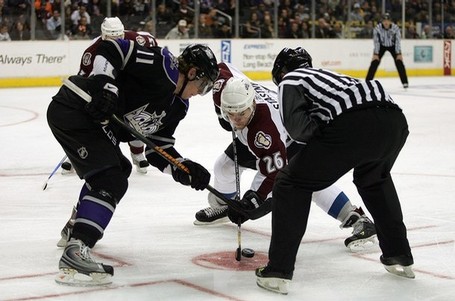 Why do you care? Because Kopitar is probably the best barometer for the contract extension that Paul Statny will sign sometime this fall. Kopitar would have been a restricted free agent next year and the Kings opened their royal coffers to avoid having to match an even more lavish offer sheet next summer. Paul Stastny is scheduled to become an RFA next summer too, and you can expect him to have his own long-term deal long before that. It will likely be in the ballpark of the Kopitar deal.

Both Stastny and Kopitar are products of the 2005 NHL Entry Draft (along with Sydney Crosby and Carey Price). Both players made their debut in the 2006-2007 season, and both almost immediately became known as key players with their respective franchises. And they haven't looked back since. Here's their career stats through Saturday's games (per hockey-reference.com):

Statistically, the pair is about as close as you're going to get. And you can even say they have similar intangibles - even though both are young, they are already counted on to take a key role in all situations - PP, SH, late-game...these guys do it all. They have different syles on the ice, but the end results are comparable. Heck, check out the quote about Kopitar from Kings GM Dean Lombardi when announcing the extension: ''Anze is a special player, but he has also shown a strong work ethic and the type character we believe is necessary to help shape the core of our team." Note to Francois Giguere: when you sign Stastny, you can just recycle this quote, because all that applies to him as well.

As a frame of reference, according hockey zone plus, Joe Sakic made $351,000 in his 4th year with the Nordiques (and had 2 100-point seasons under his belt).