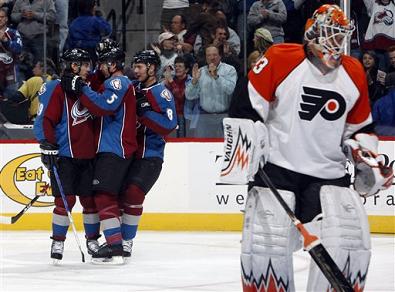 After dropping the first three games of the season in one goal losses, the Colorado Avalanche came back in a big way to beat the struggling Philadelphia Flyers 5-2.  The Avs cruised on the backs of Joe Sakic (3 assists), Wojtek Wolski (2 assists) and Paul Stastny (1 goal, 1 assist), the prime beneficiaries of the blitzing, potent offensive attack of Coach Tony Granato.

The Avs outshot the Flyers 34-18, holding Philly to just 3 shots in the first period and 4 shots in the third.  It's a good thing, too, because once the Philadelphia shot total surpassed 4, backup goalie Andrew Raycroft didn't look so good.  The only two goals he allowed came in the second period, and his overall performance (16 stops, 18 shots) was comparable with Peter Budaj's three previous showings in net.  The difference, of course, is that Raycroft gets a big shiny "1" in his W column, and Boots is still waiting.

The game was a penalty-heavy affair, the officials apparently obsessed with making obstruction calls all night long.  The Flyers were called for ten hooking, holding and interference penalties, while the Avs were called for eight.  Luckily, the Avs used all their power play chances to do some serious damage, scoring three power play goals.

Marek Svatos had a strong game, despite only playing ten minutes (with nearly half that time on the power play).  His goal may get him out of Coach Granato's doghouse indicate that he is in fact healthy and stable on his recently-repaired ACL.

In other statistical news, the Avalanche beat the Flyers in takeaways, giveaways and faceoffs.  The Avs won 20 of 30 draws, including 7 of 9 by Tyler Arnason.  Somebody worked on their faceoffs over the summer.  Unfortunately that's about all Arnason is good for, managing just one shot on goal against a porous Flyers defense, and no points.  He has 0 points in 4 games.

The Avalanche statistical leaders after the first four contests of the year are Sakic and Stastny, both with six points.  I know, I was totally surprised, too.  Hejduk's goal moves him into third place, with Cody McLeod the only other guy on the team with multiple goals so far.  Ian Laperriere leads the team with 11 penalty minutes.  Another shocking development.

Now, about the goalies.  Coach Granato may enjoy up-tempo attacks and quick-moving offensive plays, but he's not an impulsive guy.  Despite Budaj's disappointing 0-3 start, Granato's not going to start the goalie carousel insanity like his predecessor did:

Granato said this wasn't a matter of Budaj being benched, just Raycroft getting his normal one start per week to get into a good rhythm.

The goalies will stay on a schedule of three or four straight games for Budaj, then one game for Raycroft to give Boots a rest.  Hopefully knowing that he wasn't benched will motivate Budaj to regain the top form he's shown so many times in the past.

UPDATE: Yeah, not so much.  Sure enough, Granato has decided that he doesn't like consistency or common sense, so he's putting Raycroft in net to be destroyed by the Stars on Saturday.  The goalie carousel is back!

Not every team will be as easy to beat as the horrendous Flyers, so the Avs shouldn't get too confident after such a big win.  Adjustments are still necessary, and the defense will need to minimize the penalties but still pressure opposing puck-carriers and keep them out of the slot.  Work still needs to be done.