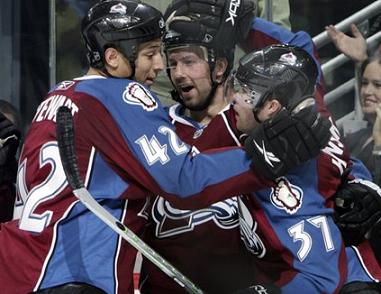 You know, for a team that's supposed to be horrible, the Avalanche are having a pretty good pre-season.  Granted, the pre-season "doesn't mean anything," but Colorado is playing well enough to suggest that the coming season might not be as painful as forecast.

With Peter Budaj providing some seriously impressive goaltending, the Avs were able to beat the Stars 3-1 last night in Denver.  Wojtek Wolski and Marek Svatos returned from injury lay-offs, Ryan Smyth continued to lead the charge and David Jones tallied his first goal of the pre-season, which was also the game-winner.

The first period was a scoreless affair.  Budaj faced eight shots from the Stars and turned them all aside.  His rebound control seems to have improved significantly since just last year, when he was still periodically giving up big second chances down low.  Not so much last night.

The second period began with the Stars on the attack, out-shooting the Avs 7-3 over the first ten minutes.  But Budaj remained solid and stopped everything he faced.  Ryan Smyth would eventually score on the power play (courtesy of Sakic and Stastny) with just over a minute left to play before the second intermission.

The third period began well, with David Jones finally hitting the back of the net on a pretty backhand that easily beat Stars stand-in Matt Climie.  TJ Hensick and Scott Hannan had the assists.  That goal would stand as the eventual game-winner.  But Dallas dickhead Steve Ott managed to get the Stars on the board just over two minutes later.  Budaj didn't lose his composure, though, and was lights-out the rest of the game.

TJ Hensick added an insurance goal at 16:50 in the third with assists from Per Ledin and Chris Stewart.

Budaj stopped 29 of 30 shots.  He's been consistently solid in every pre-season game he's played, with last night's win being the first time he's stayed in for all three periods.

The Avs won 26 of 48 faceoffs, for a total of 54%. Even more amazing was Tyler Arnason, who won seven of eight, and was the most reliable center in the circle all night. It may be just a fluke, but if he's actually worked to improve his faceoff ability over the summer, it's really paying off. More please.

The Avalanche next face the Chicago Blackhawks tomorrow night, and will look to improve their pre-season record to 4-0-1.