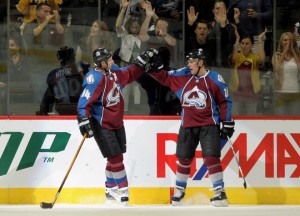 
Pre-season games don't mean a hell of a lot in the grand scheme of things, but I'm having a hard time not getting a little excited about this year's team. Last night's game was the first game where all the players dressing for the Avs have a legitimate shot of either making the team or, at the very least, getting a call-up later in the season. And while the Stars still dressed a lot of guys I've never heard of before (including their goalie), there's still lots of positives for Colorado.

Ryan Smyth scored what has to be his 17th goal of the preseason. In my grade of Smyth this summer, I said I felt Smytty could get to 40 goals this year. So far, he hasn't done anything to prove me wrong.

The Avs had three banged up players get healthy enough to make their preseason debut - David Jones, Wojtek Wolski and Marek Svatos. Double Dub and Svatos didn't make their way onto the scoresheet, but Jones had a goal and 5 shots on the way to earning the 2nd star; he led the Avs with 5 shots and, from the parts of the game I could listen to on the radio, several of those shots were solid scoring chances.

TJ Hensick had a goal and an assist to continue his strong case to make the team. Chris Stewart faces longer odds, but also notched an assist (while putting up 4 shots). And obviously Tyler Arnason loves to check out hockey blogs, as he was an impressive 7 of 8 in the faceoff circle (we won 4 of 5 against Mike Ribeiro - the same Mike Rebeiro who won 11 of 18 against the Avs a week ago in Dallas).

And then there's Peter Budaj. In the 3 games we have official stats for (neutral site games like the Frozen Fury are teh suck for stats), Budaj has a GAA of 1.39 and a .956 save percentage. He's given the Avs a chance to win in all 3 games - the Avalanche have trailed for a whopping 1 minute and 32 seconds in those 3. I Believe in Budaj, indeed!

The game report (which includes shift charts) is up. You may notice some changes, but it's still very much in "beta" - lots of formatting changes to come. I should have the event summary included in time for the next game (ultimately, my goal is to include all the info from each game on this one report). I've also updated the reports for the first and second games.