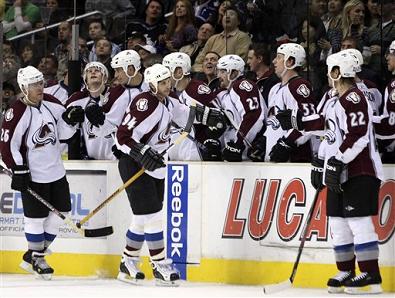 I missed the game last night due to an impromptu fit of head-banging and floor punching, and didn't check the score until I woke up this morning.  I honestly expected an Avalanche loss and a whole stream of "Budaj Has Got To Go" headlines on my phone.

Lo and behold, that was not the case.  In fact, Peter Budaj put in a better showing than in his previous three starts and actually pulled out a win this time.  Albeit it was a one-goal win and his save percentage was still below .900, but a win nonetheless.  The Avalanche beat the Kings 4-3.

Like I said, I missed the game, so no recap from me.  You can read the AP report here.  I did see some video clips, though, and I have to say that Ryan Smyth's third period goal was one of the best of the year so far, and will likely be one of the best by the end of the season.  He's known as a one-trick pony (ass in face of goalie, that's it), but he's showing a more dynamic side of himself this year.  I "blame" coach Tony Granato for that.

And speaking of Smyth, his line, the RPM line, is so amazing it's hard to describe.  We knew last year that Smyth, Paul Stastny and Milan Hejduk had serious chemistry, but it's even better this year.  Now that they're not being constantly split up by Joel Queneville, they've become an even greater force to be reckoned with. In six games, the three players have 24 points combined.  Stastny currently leads the team with 10 points (1 goal, 9 assists) and is just one point behind league leader Evgeni Malkin (who has played one more game).

The RPM Line is the centerpiece of a team that has scored more goals (24) than any other team in the West so far.  If the defense can stay competent and Peter Budaj can stay confident, the Avs could end up surpassing everyone's expectations this season.  That said, it's definitely a big "if."

What is far more certain is that Adrian Dater is going to take jabs at Budaj no matter what he does (short of a shutout and/or the Vezina Trophy):

Budaj didn't inspire much confidence early on, allowing a short-sided, tough angle shot by Oscar Moller through the 5-hole. It came at the end of a Kings power play, at 6:19 of the first.

Yep, those short-sided, tough angle 5 hole shots are super easy to stop, so Budaj failing to do so really early in the game must have been damn-near crippling for the Avs.  I'm not sure how they refrained from killing him right there on the ice.  God he sucks.

At least he finally got that elusive first "W."

The next game for the Avs is Thursday at home against Edmonton.