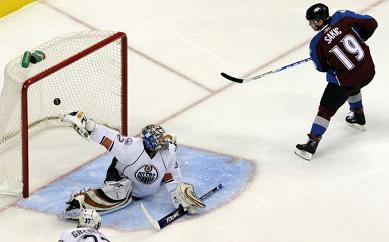 Now this is the kind of performance we can get behind.  Paul Stastny and Joe Sakic put up more points, Peter Budaj had a superb night in net, and Ian Laperriere earned a Gordie Howe Hat Trick.  The Avalanche beat the Oilers 4-1, extending their win streak to four games.

Once again, I failed to catch the game due to me being the busiest person on the face of the planet, so for a recap you should go here or here.

A couple of days ago Drafty put up a post about how balanced the Avalanche scoring has been so far this season, and last night's game just drove the point home.  Most of the lower lines contributed significantly to the win over the Oilers.  Lappy had a goal and an assist (plus the fight = GHHT), Ben Guite, filling in for a sick David Jones, added two assists.  Cody McLeod also scored and Cody McCormick played just six minutes but managed to get in a fight, which is always good for him.  Those solid contributions from the third and fourth liners are what makes the Avalanche so dangerous.

We won't talk about Tyler Arnason's one shot and zero points in twelve minutes of ice time.  Moving along...

Peter Budaj finally had the dominant performance people have been crying for since the start of the season, stopping 25 of 26 shots and leaving the Oilers with no angles to exploit anywhere on the ice.  This is the kind of job he's capable of doing every night if the defense in front of him has their stuff together, which they did last night.  You give Budaj some decent support and the man is a puck-stopping machine.

From the AP recap linked above:

Peter Budaj had his second solid game, stopping 25 shots. He started the season rocky, giving up 13 goals in his first three starts, but has found his groove.

"I feel pretty good. The team's playing really well right now, and we want to keep this going," Budaj said.

I'm not sure if the previous game was all that solid, but Budaj is definitely showing serious improvement as the team around him improves.  Even Dater had nice things to say:

That was all goalie Peter Budaj would need. He played his strongest game of the year in getting his second straight win. Although he wasn't tested much in the second half of the game, the Oilers did put some tough rubber at him in the first period but came away with nothing.

We'll disregard the fact that the Oilers had just one fewer shot on goal in the third period (9) than they did in the first (10).  At least Dater had something nice to say.

The Avs, having won four games in a row, have moved from dead last in the Northwest Division to a tie for second with the Oilers.  Colorado is still just a game above .500, but when you've only played seven, it's not that big of a deal.

Finally, I have to extend my most heartfelt thanks to those of you who participated in the game thread last night.  635 comments is truly epic!  If this keeps up, I'm going to have to come up with an automatic process to start an overflow thread once the original reaches 500 or so to keep the load times short.  Regardless, thanks, and keep up the great "work!"