Share All sharing options for: Game 8: Avalanche 2, Sabres 1 (SO) 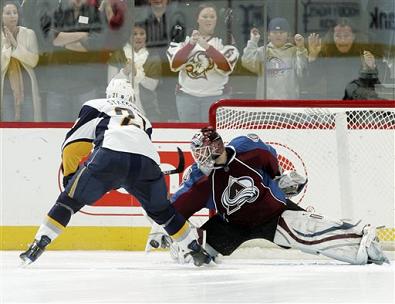 Remember when the Avs were down 0-3 after the first three games of the season, and some people were panicking like they'd just bought 4000 shares of Lehman Brothers?  You know, stuff like calling for the general manager's head and tossing the starting goalie under the bus?  Remember that?  I do.

What did we say?  Don't panic.  Relax.  It was just too early to start freaking out.

Well, the Avalanche have made some people look pretty silly over the past few games, extending their win streak to five with last night's impressive playoffesque victory over the Buffalo Sabres in a shootout, 2-1.

Peter Budaj had by far his most outstanding performance of the year (maybe in two years), stopping 29 of 30 shots and winning the shootout with some superb saves---something he has struggled to do in the past.  And he beat Sabres ace Ryan Miller, who still has some of the best statistics among all NHL goalies so far this year.

Miller, despite his own strong performance, went all crybaby last night after the lone regulation goal by the Avalanche (a shot from Jordan Leopold) found the back of the net off an accidental tip-in off a Sabres teammate:

"Everyone knows Ryan Smyth comes through and hits the goalie's knob," Miller said. "I told the ref, 'I don't want the contact. I don't need a penalty, I just don't want the contact.' He comes by and twists me out of position. That was a slow-moving puck that I could reach if I'm set. I had the ice, I was there first. Don't touch me."

Ignoring the amazing first sentence and proceeding on to the boo hoo whiny baby part of the quote, I wonder if the Eastern Conference plays that different of a style of hockey than the West.  In the West, the goalies pretty much have to wear spiked shoulderpads and carry axes for as much battle as they do just outside the crease.  Since when does any goalie expect to not be touched?  I think bumping the end of the goalie stick is probably the wimpiest complaint a goalie can come up with, honestly.  I'm sure it's annoying, but it's not like Sean Avery is standing in your face waving his arms around for an entire shift.  Buck up, Miller.

Paul Stastny failed to score for the first time this season, but it's cool because he's still awesome.  Jordan Leopold had the lone goal for the Avs while Milan Hejduk and Smyth got the assists.  Daniel Paille scored for the Sabres.

The Avs are now 5-3-0, and are in sole possession of second place in the Northwest Division, a point behind Minnesota but one ahead of Calgary.  Their next game is Tuesday night against the Flames.