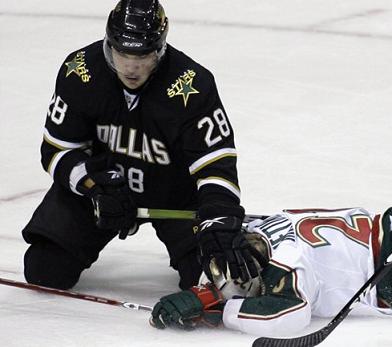 I was pretty sure it wasn't ever going to happen this season, but the Minnesota Wild finally lost a game in regulation.  It took them eight games to do it, but last night they lost to the Dallas Stars (and their rookie backup goalie) 4-2.

Without Marian Gaborik in the lineup, it was obvious the Wild couldn't keep winning forever.  Mikko Koivu has been awesome so far and Andrew Brunette is still a solid player, but now the Wild have a guy named Clutterbuck on offense, so it can't be going that great for them.

Brenden Morrow scored for the Stars just 13 seconds into the game, and from there it was all Dallas.  By the end of the first period the score was 3-1 and Wild starting goalie Niklas Backstrom had been yanked.  Giving up 3 goals on 13 shots is even worse than Peter Budaj The Worst Goalie In The World Ever!

Unfortunately, the Wild are still three points ahead of the Avs in the Northwest Division standings, and Minnesota has played one less game,  but it gives the Avs another chance to close the gap and get competitive.  The two teams don't play each other until November 6th.  Both the Avs and the Wild have three games between now and then.