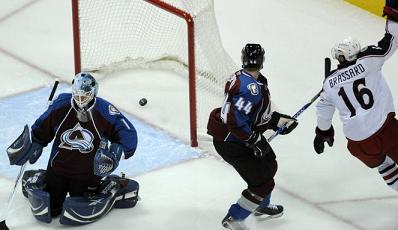 I'm going to go out on a limb here and suggest (just suggest!) that Andrew Raycroft is not a very good goalie.  I know, it's probably unfair and it distracts everyone's attention away from the fact that Peter Budaj is the Worst Starting Goalie Ever, but I just thought I'd throw it out there.

I'm also going to suggest (suggest!) that stopping ten shots out of fourteen qualifies as a poor overall performance.  I know, I know, it's nowhere near as bad as Budaj's most recent outing (30 shots, 27 saves), because every outing he has is awful, but you have to admit that Raycroft was a little less than super.

In good news, Paul Stastny got back to his scoring ways with a power play goal in the second period, and Tyler Arnason actually scored against a goalie, also tallying a power play goal for himself in the third.  The Avs went 2-4 with the man advantage and didn't have to kill anything off because every Colorado penalty was for a fight.  Darcy Tucker, Ian Laperriere and Cody McLeod all got in scuffles.  It was Tucker's first of the year, and he also tied for the team lead in hits (5) with McLeod.  What a bruiser.

The Avs have now lost two in a row and are stuck back at .500 with a 5-5 record.  I'm a little worried that we'll be enduring this roller coaster all year.  Let's hope not.  I'm not a puker, but I really don't want to put my stomach to the test.

The next Avalanche game is Sunday against the Sharks.  Yeah, the "best in the West" San Jose Sharks with that awesome first-year coach the Avs didn't even bother to interview despite needing a new bench boss.  Right now, my enthusiasm is stuck on "11," as I'm sure you can tell.