In the video linked in this thread, an interview with Peter Budaj after his dominant win against the Stars, there is a mask visible behind him on the top shelf of his locker.

The best screen cap I could get was this: 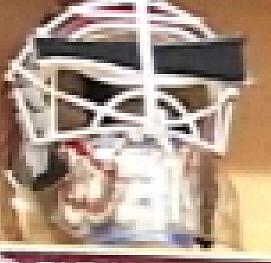 Notice the large, blocky (and very white) number 31 on the chin.  Also notice the shape on the right side of the lower mask (your left), which looks like a big white blob with a very thick burgundy outline.  This design is very different from his current face protector, the "Assassin's Creed" (AC) mask: 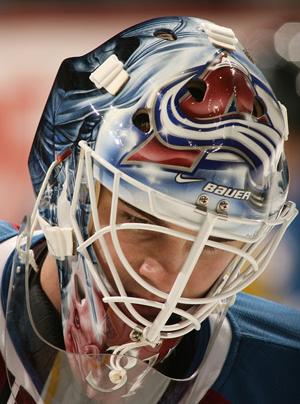 The two masks are very clearly different.  The mask on the shelf in the first picture somewhat resembles the old mask Budaj wore for much of last season, a profile shot of which can be seen here.  Notice, however, that while the old mask has white shapes (skeleton hands) on the jaw panels, they do not have thick burgundy outlines.  So the mystery mask on the shelf in his locker is not that one, either.

To further add to the mystery, Budaj wore his AC mask in at least two pre-season games so far this year.  First against the Kings on September 24th, and again against the Stars the next day.

But in the most recent game in which he appeared, October 1st, against the Stars again, Budaj looks to have been wearing something different.  In these horrendously low-quality shots from the Avalanche web site, notice that the mask he's wearing resembles the one in his locker, especially along the jaw line (the white blobs with the burgundy outlines). 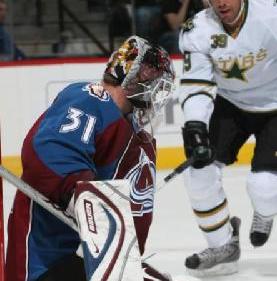 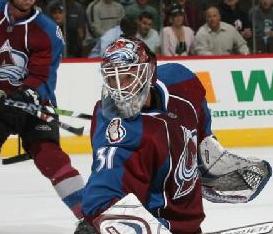 While the Avalanche logo on the forehead is very similar to the AC mask, and Ned Flanders is still clearly visible on the back, the side panels are far darker, and the chin area is totally different. Hmm...

Ladies and gentlemen, I'd say Peter Budaj has a new mask!  And in case you are completely blown away by my intense powers of deduction, remember that I am in fact The Batman.

Anybody know for sure, or know where to find better pictures?  Can somebody from the Denver Post or the RMN get a better shot of this for us?  Dater, get on this, STAT!