Terry Frei did a great piece on Adam Foote, which appeared in today's Denver Post.  In it he talks about his move from Columbus (minus the bogus rumors), the rebirth of his defensive style, his role on the Avalanche and the fact that hockey still makes him feel like a kid, even at age 37.

But the best part of the article is the associated photo of Foote by Post photographer Craig Walker.  Why?  Because it's an excellent interpretation of the famous "Kubrick Stare," the head-down-eyes-up gaze of crazy that director Stanley Kubrick worked into most of his movies (see #29 on this list).  I'm a big fan.

And there's absolutely no question that I'll be using the cropped version below pretty much constantly throughout the season: 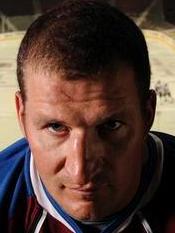 I hope Mr. Walker and the Post don't mind.*  I won't be making any money off of it, I'm pretty sure of that.

ADDENDUM: I think Foote and Ian Laperriere should commission a book entitled "The Greatest Hockey Noses" before they retire and find plastic surgeons.

*Seriously, I hope they don't mind because I don't want to get sued, and all these "cease and desist" letters are starting to pose a serious fire hazard in my condo.  The fire marshal is pissed.