There's No Sheriff In Town

Share All sharing options for: There's No Sheriff In Town 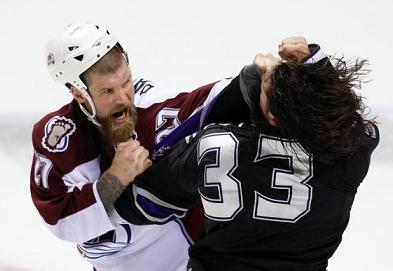 Scott Parker, an on-again, off-again enforcer loved by many Avalanche fans, is no longer with the team.  He's been fired for what the team calls "insubordination:"

Parker, who played for the Avalanche for parts of six seasons, refused to report to the Lake Erie Monsters of the American Hockey League after being demoted Oct. 17. Parker had concussion symptoms at the time and wasn't able to play, but later refused assignment to the Monsters outright.

I mean, I know it's Cleveland and all, but even in the minor leagues he was still going to make at least $100,000 a year.  That would be a pretty big raise for most of us, and we don't get to play a game for a living.

Assuming the team won't eventually re-sign him for some reason, the firing means an end of an era for the Avalanche.  Parker was drafted in the first round (20th overall) in the 1998 NHL Entry Draft by Colorado and in the Stanley Cup year of 2000-01, "The Sheriff" managed 155 penalty minutes in 69 games.  He spent a couple of seasons in San Jose but then came back to the Avs in 2006-07.  He hadn't played more than 25 games in a season since 2003-04. 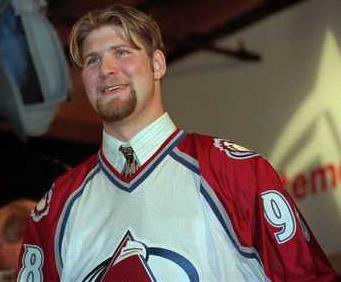 They grow up so fast.

Considering how terrible a hockey player he always was, it's amazing his career lasted as long as it did.  And it might not be over, since he's now a free agent and at least one or two teams might be looking for a slow, uncoordinated jerk to mercilessly pummel opposing slow, uncoordinated jerks.  If that's the case, he's their man.