Share All sharing options for: Interview with Steve McKichan 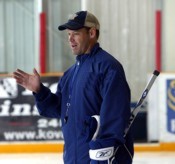 Over the summer I managed to get in contact with former Toronto Maple Leafs goaltending coach Steve McKichan.  He's a frequent commenter and writer for one of the goalie message boards I often waste valuable work time browsing through.  He runs the Future Pro Goalie School out of his home near Toronto and has traveled all over the US and Canada giving camps and lessons.  He was scheduled to actually give a camp in my neck of the woods about a month ago, and I had signed up and everything, but due to health concerns, he had to cancel at the last minute.  I look forward to meeting him in person and getting some help for my woeful 'game'.

To make a long story longer, after the Avs landed Andrew Raycroft for the backup goaltender position during free agency, I contacted Steve about doing a quick interview about his former 'student.' He was gracious enough to answer my bumbling questions.  Unfortunately, the same health concerns that I mentioned above have drastically cut back on his writing time, so I haven't been able to chase him down for any follow-up questions, which is why this post didn't appear at the beginning of the season as originally planned.  Still, I thought some of you  (i.e. Savage) would be interested in what parts of the interview I DO have.  Questions are after the jump, with Steve's responses in italics. Enjoy!

Now that we've gotten your only required credential out of the way, on to the real questions:

Now some general goaltending questions while I have your attention: