Share All sharing options for: Game 15: Avalanche 2, Canucks 1 (SO) 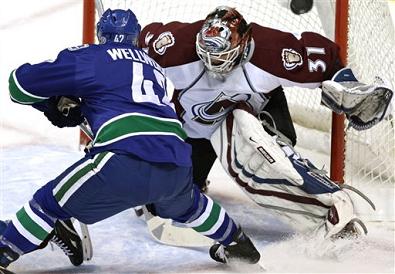 It's a good thing I like rollercoasters because there's no better metaphor for the Colorado Avalanche this season.  Up and down and up again.

The Avalanche goalie stopped 31 of 32 shots, as well as two out of three in the shootout to overcome an equally impressive performance from Roberto Luongo in the Vancouver net.  Boots is now 5-7-0 with a 2.91 GAA and a closer-to-acceptable .893 save percentage.  Baby steps.

The Avs won their second game in a row, beating the Vancouver Canucks 2-1 in a shootout last night.  The lone goal in regulation for Colorado was scored on the power play by Paul Stastny Marek Svatos, with assists from fellow young guns Marek Svatos Paul Stastny and Wojtek Wolski.  The lone goal scored for Vancouver was a second period penalty shot by Taylor Pyatt off a questionable call against Jordan Leopold.

The Avalanche defense was again relatively solid, with steady play by all six of the starters.  Adam Foote topped the ice time charts with 25 minutes, while Leoprone played just 16:46 and was (if unfairly) at fault for the Canucks goal.  But he survived another game without injury, so there's that.

I'd talk about the offense, but there's still not a lot to talk about.  The potent Avalanche offense that scored at will early in the season has now vanished almost completely.  But so have the goals against, so we'll take it.

I know it frustrates some MHH readers for me to harp on this point, but I'm going to run through some of the reactions to Budaj's performance last night because it's my blog and you don't have to read it.  I'm sticking my tongue out at you right now, you babies.  This blog has two editorial purposes.  The first is to follow the Colorado Avalanche.  The second is to follow the press coverage of the Colorado Avalanche.  Embrace them both, or just get used to being frustrated.

From the AP recap (emphasis mine):

"[Luongo] is playing on top of his game right now, so it's so much sweeter we were able to beat him," said Budaj, who stopped 31 shots in regulation and overtime and two more in the shootout. "He's probably the hottest goalie in the league."

Budaj isn't far behind. Coming off a shutout of Nashville on Saturday that ended Colorado's five-game losing streak, the only goal he gave up against the Canucks came on Taylor Pyatt's penalty shot early in the second period.

Thanks to great goaltending by the Avalanche's Peter Budaj and Vancouver's Roberto Luongo, both teams got at least some advancement in the standings Wednesday night.

Budaj, however, was just a bit better than the all-star Luongo and that's why the Avs got the extra point in their 2-1 shootout victory over the Canucks at General Motors Place.

Asked if it was his best game of the season, Budaj said: "I think so. I felt great from the start, but my team was great in front of me. And I got a little lucky at times too."

But don't worry, Dater still managed to find things to crap on in his post-game blog post (emphasis mine):

About Budaj: He is looking more square to the puck and seems to be moving better laterally. Not just moving better, but moving while still staying square to shots, not just wildly jumping from one side to the other.

I still think, though, that he allows too many big rebounds. He let out a few tonight, and it nearly cost him. He tends to just kick out a lot of low shots. Many times, he kicks it to a teammate and the puck goes the other way. But sometimes he seems to just kick it out to anywhere, and sometimes the opposition gets there first and close calls or goals result.

Still, it’s nice to be writing some better things about Boods finally.

I bet it is, since it totally wasn't a personal choice or anything.

The next Avalanche game is Saturday night against the Oilers in Edmonton.  The Northwestern Division Catch Up Tour continues.