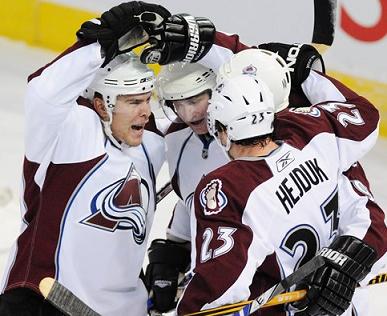 Claude Lemieux was a dirty player.  But he was a clutch dirty player, a pest who could score that late tying or game-winning goal when his team needed it the most.  He was a complete jerk who annoyed and injured opponents but could also carry a team to victory.

No doubt about it, Darcy Tucker is also a dirty player.  He's a pest and an annoyance.  But he's also starting to make a case for himself as a go-to guy when the team needs it the most.  He's got a long way to go (and a lot more rings to win) before he's reached Claude Lemieux status, but last night's game against the Edmonton Oilers was a good start.

The Avs were down 2-1 late in the third period when they were gifted a 5-on-3 power play by two late, stupid Edmonton penalties.  Coach Tony Granato pulled goalie Peter Budaj to make it 6-on-3 and the Avs didn't waste the opportunity.  With just ten seconds left in regulation, Darcy Tucker put a feed from Jordan Leopold into the back of the net and took the game to overtime.  Tucker would then go on to score the winning goal in the shootout, leading the Avs to a 3-2 victory.

All of that almost didn't happen, though, because the Oilers nearly scored on the Avalanche empty net just seconds before, but Brett Clark was there to kick the puck away.  So toss him on the list of game heroes with Tucker.

And add one more name, too: Peter Budaj.  Playing in his sixth straight game, Budaj stopped 33 of 35 shots and held the Avalanche in the game when they were clearly being outplayed.  He also won his second straight shootout, a situation he has not previously excelled in.

Avs goalie Peter Budaj deserved the most credit for the victory. He was excellent, stopping 33-of-35 shots, including four-of-five in the shootout.

"We won because Peter kept us in it," Avs coach Tony Granato said. "He gave us a chance to get not only one point, but then two in the shootout. And Clarkie — he was just standing there on an island on that empty net, and then Tucker made the play when we had to have it. We didn't play especially well at times, but Peter gave us a chance tonight."

The downside of this divisional road trip so far has been the Avs' inability to win in regulation.  They've gifted points to Vancouver and Edmonton now, and next play Calgary on Tuesday.  It's tough to catch up in the standings when your opponents are inching ahead with you.  But a win is a win and we'll take as many as the Avs want to give us.