Son of Stastny To Stick Around Awhile

Share All sharing options for: Son of Stastny To Stick Around Awhile 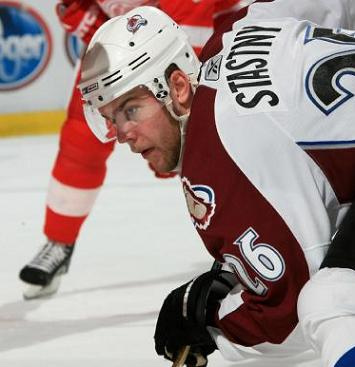 Following a common National Hockey League trend, the Colorado Avalanche moved to lock down their brightest young star by signing Paul Stastny to a 5-year, $33 million contract extension yesterday.  His base salary of $6.6 million per year (beginning next season) will make him the highest paid player on the Avs.

"I'm still in a state of shock a little bit," said Stastny, shortly after agreeing to the deal. "I'm so excited, though. Knowing I'll be in a place I've been accustomed to, playing with the organization and in college here, it's very exciting. I'm just fortunate to have an opportunity like this."

Then again, I'd be pumped, too, if I was making more than $6 million in my early twenties.  I had to wait until I was like 27 for that kind of money.

But is he worth it?

Though Stastny has battled inconsistency from time to time (he had a long multi-game slump last season and is currently suffering with the rest of the Avalanche offense right now), he's one of the most reliable point-producers in the NHL. And at his age, it's not unreasonable to think he'll only get better.

Also, while he's never been given any letter to wear so far, most Avalanche fans assume that when the Joe Sakic era is finally over, Paul Stastny will take over as captain and lead the team to future success. At least, that's what we all hope.

With his calm demeanor, amazing hockey sense and affable personality, there's no doubt an older, wiser Paul Stastny could be one of the best captains in the NHL.  The only real question is how good the team around him will be when he's given the C.

Time will tell.  Until then, this contract is probably the best in general manager Francois Giguere's short tenure with the Avalanche.  I couldn't imagine seeing Son of Stastny wearing a different logo on his chest any time soon.