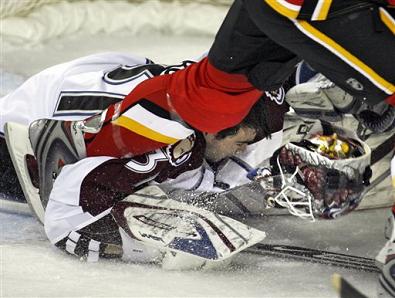 Sometimes a team has to rely on their goaltender to "steal" a game and get them out of a jam.  Making that the strategy for every game is probably not a recipe for success.  The Colorado Avalanche once again put all their eggs in the Peter Budaj basket, and this time they got burned for it.  And not because Budaj failed to produce, but because one guy can't be expected to carry a team that doesn't look like it wants to play hockey at all.

The Calgary Flames took advantage of the Avs' ambivalence and crushed them 4-1.  Budaj, for what it's worth, stopped 47 of the 50 shots he faced.  That's right, 50 shots, which don't include the 25 his defensive teammates managed to block.

"We were in the box all night because we were second on the puck. That's all of our faults. Except for Boods tonight, nobody showed up."

Seriously, except for Peter Budaj and maybe Marek Svatos, nobody on the Colorado Avalanche came to play hockey last night.  According to Adrian Dater, it was one of the worst games of all time for the franchise.

There's really not too much else to say.  I'll let commentator "Neil" over at All Things Avs take it away:

Was that the ‘89 Quebec Nordiques out there? That was just awful. Nobody played the game last night other than Budaj - everyone else should feel embarrassed to be a professional athlete with that effort.

ADDENDUM: Reading through last night's game thread, I really have to compliment the participants for keeping their comments humorous despite the atrocious play on the ice.  Of all the great quips, my favorite had to be Bob in Boulder's "18 Arnasons and one real goalie" comment.  Well done, sir, well done.