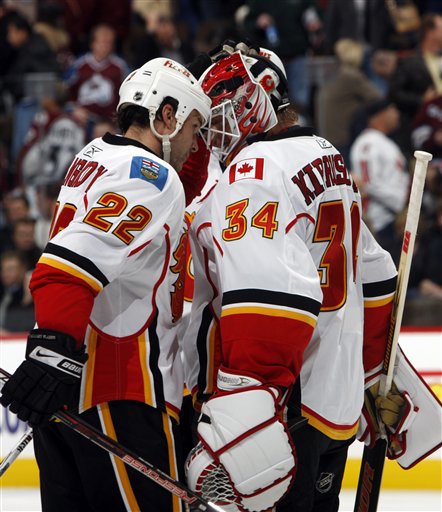 That's it. Thanks for checking in, folks.

Okay, that's not really the only good news, although it may seem like it today. Peter Budaj continues his torrid streak, allowing just one goal against the Flames. Unfortunately, that's one less than our anemic offense could muster and so, for the 4th time in 4 tries, the Flames won.

At the risk of getting fired from my new gig here on the first day, I have to admit that I felt the Avalanche defense wasn't all that bad on Tuesday (you know, the 50 shot game). Although the Avs had all sorts of clearing issues in that game (I'm looking at you Brett "Backhand" Clark), I felt they were generally steady overall. The biggest issue was fatigue - our forwards never had the puck in the Calgary zone. As they game wore on, our defense just wore out.

Last night, our defense was even better. The Avalanche forwards were noticeably diligent in their efforts to get back and help (Tuesday, not so much) and the defensemen seemed to take that extra second to make sure their clearing attempt would actually, you know, clear. Peter Budaj faced 33 shots, but other than a couple of excellent chances for Curtis Glencross in the 3rd, didn't have to make too many difficult saves. The Avs continue to block a ton of shots (21 last night, 25 on Tuesday). The bottom line is that after a shaky start to the season, defense and goaltending is not the issue.

It's the offense, stupid. Or it's the stupid offense - take your pick. The Avalanche mustered 18 shots on Mikka Kiprusoff and he didn't  have to break a sweat until late in the game. The Avs had very little sustained pressure on Calgary in the two games - every time they entered the zone, it would be cleared out quickly or Kipper would swallow up the one shot on the net. The Avs lack of team speed is painfully obvious. There's almost no chemistry anywhere (how many times did we see an Avalanche fighting for a loose puck...with another Avalanche?). At the start of the season, the Avs were putting on a passing clinic - a forward under pressure would drop the puck to a specific spot just as his teammate was getting to that area. Not any more - passes are sloppy and to the wrong spot and the few shots the team is getting on net are easily stopped. What happened? Did we stop doing the passing drills? How come Paul Stastny knew Ryan Smyth was going to dump the puck behind the net in game 1, but not game 18?

After the disaster in Calgary on Tuesday, every line and pairing other than Foote and Hannan was changed. John-Michael Liles paired with Ruslan Salei (Salei has been playing very well lately) while Brett Clark and Jordan Leopold were paired together to perhaps make it easier to showcase the pair for potential trades.

Up front, it was

Marek Svatos was injured in the game and missed the 3rd period. If he, Ben Guite or Joe Sakic is unable to go on Saturday, the Avs will need to place one of them on IR and call up someone from Lake Erie.

The Avs play in LA on Saturday and Anaheim on Monday. They have a very busy schedule next week with 5 games in 8 days. I'll be covering this a little more later on today.