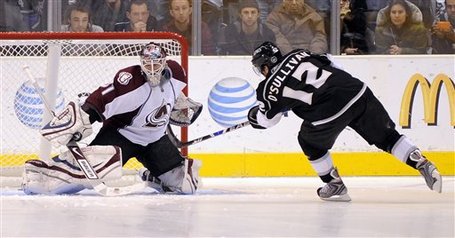 As I mentioned on Friday, the Colorado Avalanche have a busy Thanksgiving week, with five very winnable games. They started on the right foot in Los Angeles Saturday night, overcoming injuries to Adam Foote and Wojtek Wolski to beat the Kings in the shootout 4-3.

The beleaguered Avalanche offense put in a good, full-game effort against a very solid Los Angeles team. The Avs put 13 first period shots on Kings goalie Erik Ersberg and took the lead when Milan Hejduk scored on the powerplay at the 17:10 mark. It was Hejduk's first goal in 8 games and just the 6th time the Avs have scored first this year.

Wojtek Wolski made it 2-0 5:59 into the 2nd period. His PP goal was his first goal since opening night (18 games) and his first PP goal of the year.

Unfortunately, Kings coach Terry Murray responded to the goal by putting his 4th line on the ice. One of those 4th liners was John Zeiler. Zeiler, playing in his 2nd game of the year, chased Adam Foote into the corner and drove Foote hard into the boards from behind. The hit from behind was bad enough, but the fact that Zeiler used his arm to propel Foote even harder was just inexcusable. Foote dropped hard to the ice and didn't move for some time. It looked like he would be leaving the ice on a stretcher, but eventually skated off with some help. He did not return. Zeiler was tossed from the game (which probably saved his bacon).

Foote's loss would have an impact. The remaining 5 defensemen all logged substantial ice time. More importantly, after an Alexander Frolov PP goal in the 2nd to make it 2-1, the Kings took the lead on two goals early in the 3rd. Foote's partner Scott Hannan was on the ice for both of those goals. Perhaps if Foote was out there instead of Clark and Salei (respectively), those goals wouldn't have happened.

In the end, it worked out okay. Paul Stastny redirected a Scott Hannan pass at the 4:31 mark to tie the game. It was Stastny's first even strength goal of the season (really?) and his first goal of any kind in 10 games. Wojtek Wolski had an assist on the play to give him (and Stastny) a 2-point night. Unfortunately, Wolski would get injured in the same corner as Foote not long after that when he lost his footing just as Sean O'Donnell was coming in to lay on a hit. He ended up taking an arm to the head and he too had to leave the game. Hopefully, it's not a concussion as Wolski already has had at least one (thanks again, Craig Conroy) and you don't want to see him running into trouble with those.

The Avalanche had to kill of a late, boneheaded neutral-zone penalty by Darcy Tucker, but then had a flurry of late chances that couldn't quite get past Ersberg (and speaking of near misses, Matt Greene fortunately missed landing a cheap elbow to the head of Ryan Smyth in the final minute).

With the game knotted at the end of regulation, we knew how it would end. The Avs have yet to see a game decided in overtime this year; all 4 of their OT games have gone to the shootout, and they've now won all 4. Peter Budaj stoned Patrick O'Sullivan and Dustin Brown while Marek Svatos and Milan Hejduk both embarrassed Ersberg (who was solid up until that point). The Avs have now won 8 straight shootout games, a streak started by this crazy game.

It was a big win for the Avs. They've been getting excellent defense, goaltending and penalty killing and hopefully the 2 PP goals and having some key offensive players get of the schnide is something the Avs can build on.

Brian Willsie was recalled on Friday and, as speculated, played in place of David Jones. TJ Hensick was moved up to the 1st line and played very well - I really like how he finds a way to get the puck to a teammate in front of the net.

The Avalanche travel across town to take on the Ducks in Anaheim.