Things Are Not Just Ducky For The Avs 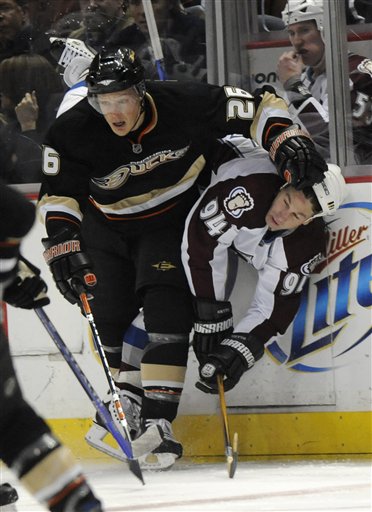 Early in last night's game, Altidude Peter McNab said that one way to beat the Ducks was with an aggressive forecheck. Under pressure, the Ducks would start to lose composure and take penalties and the Avalanche would make them pay on the ensuing powerplays. That may be true. Of course, we didn't see any of that. Instead, Anaheim showed that that's also a really good way to beat the Avalanche.

In a game that was eerily reminiscent of the disastrous home-and-home against Calgary last week, the Ducks used a relentless forecheck against the Avalanche to create pressure, to force penalties and to keep the Avs out of their zone. The Avalanche had no answer to the pressure - they could barely get the puck out of their zone, let alone mount an odd-man counter attack the other way. The Avalanche took just three minor penalties, but all three resulted in Anaheim goals (two on the powerplay, one just a few seconds after a penalty had expired). Peter Budaj didn't look terrible, but he did look a bit fatigued. In hindsight, this would have been a perfect game to rest him as the Avs had no chance at winning (Tony Granato did lift him after the 2nd intermission).

For the first five minutes of the game, the Avalanche forwards tried something new: any time someone in white had the puck, the other forwards skated right too the net. It generated some chances early but seemed to be quickly abandoned in favor of the old strategy of completely random play in the offensize zone. It worked as expected - the Avs scored one goal.

For the 3rd time in two days, an Avalanche player had to be helped off the ice. In the second period, Darcy Tucker had an extraordinarly awkward collision with Brendan Morrison in front of the Avalanche bench. Tucker had just come on the ice and was completely flat-footed for the hit and seemed to injure his leg lower body on the play. As a precaution, the Avs medical staff also removed his spleen, appendix, tonsils and wisdom teeth and performed a precautionary root canal. He should be back in action in 1-100 days.

The Avalanche have had a lot of these flat games lately. I still believe they are better than the way they are playing, but they need to find their way soon. With another few weeks of this tepid effort, the only thing we'll be looking forward to is draft day.

After finally getting to the point where Sakic's back was healthy enough to play, Super Joe had to have an emergency root canal. The Avs were also without Adam Foote, Wojtek Wolski and Ben Guite. Daniel Tjarnqvist made his Avalanche debut and played okay.

The Avs host the St Louis Blues on Wednesday. The Blues always seem to give the Avs more trouble than they should. We're 3-5 against St Louis in the last two years. None of the 8 games have been decided by fewer than two goals and the winner has scored at least 4 goals in 7 of the 8 games.