The Avalanche Finally Get The Point (Shot) 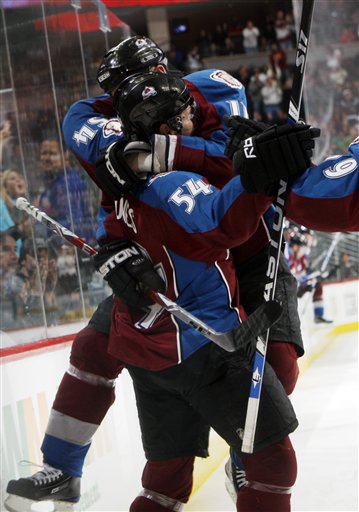 Well, it wasn't the most stunning victory of all time, but a win is a win. The Avalanche probably didn't play well enough to beat a Calgary or an Anaheim, but they were good enough to beat Manny Legace and the Blues.

The Avalanche had the early jump on a Blues team that had played the night before in Nashville. The Avs outshot St Louis 11-5 in the first period. One of those shots was from Daniel Tjarnqvist who found a seam in the slot while David Jones controlled the puck behind the St Louis net. Jones fed a nice pass to Tjarnqvist and he buried it. Since it's only his second game, Tjarnqvist obviously was not aware that Avalanche defensemen do not jump into the play like that and I'm sure the coaching staff will have that rectified by the next game...

The Blues tied it at the 4:52 of the 2nd period. Eric Brewer skated around the Avalanche zone like Bobby Orr before finding Keith Tkachuk in the slot. Tkachuk rifled a bullet past Peter Budaj. But, for the 4th time in his last 8 starts, one goal was all Budaj was giving up. The defense played very well in front of him all night, and very few of his 21 saves were difficult.

Right after the 10 minute mark, Ryan Smyth scored the eventual game winner - a beautiful deflection of Jordan Leopold's point shot through a barely-puck-sized hole between Legace's pads. Leopold took several point shots in the game and I wonder why he doesn't get more PP time - he led the team in PP time in this game, but he's behind Liles, Clark and Salei in PP TOI this season. Hopefully, the Tjarnqvist and Smyth goals will prompt the coaching staff to encourage the D to get a little more active on the offensive side of the coin.

Ian Laperriere scored on a 539-foot wrister at the 8:11 mark of the 3rd. Okay, it was from just inside the blueline, but it still had no business going in. Legace was screened on the play...but also was clearly not even remotely prepared for a shot from that point. Legace has been an Avalanche killer in his career, but he looked ordinary in this game. The Avs had to kill a double minor on TJ Hensick with 4 minutes left, but the Blues mustered just 3 shots even with Legace pulled for half of it. It seemed like the Avs should have grabbed an empty netter, since most of these games go to 4-1, but a 2-goal win is nothing to complain about - it's the first time the Avs have won by more than a goal since October 23rd (and just the 3rd time all year).

For those in the US, have a safe and enjoyable Thanksgiving. To everyone else, Happy Thursday!

Joe Sakic and Wojtek Wolski returned to the lineup, and played together with Milan Hejduk on the first line. Sakic seemed to have some nice jump early on, but didn't factor in the scoring. Cody McCormick was the odd forward out and watched from the press box.

On defense, Adam Foote remains out and John-Michael Liles missed the game due to the flu. I got nervous every time I saw Cumiskey and Leopold on the ice, but no major damage was done.

The Avs are in Phoenix on Friday afternoon (4pm eastern) and then come back to the Pepsi Center on Saturday to host the Lightning.