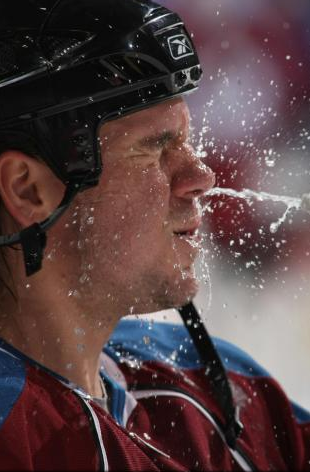 (Editor's Note: Joe's eyebrow-waxing appointment is running long this morning and Mike was last seen hopping a freight train to Yuma, so I'm pinch-hitting with a copy of my recap)

Well, if we're going to lose to poor teams like the Columbus Blue Jackets, surely we can lose to the good ones too, right? The Avs played their best hockey of the week against San Jose. Unfortunately, that isn't saying much and it still wasn't good enough to beat the Sharks.

It looked like it was going to be a terrible game. Although the Avs had some early jump, the Sharks got on the board first at the 7:02 mark. Milan Milachek took advantage of some extra skating room granted by John-Michael Liles and Scott Hannan and converted Joe Pavelski's cross-ice pass into a laser beam of a shot over Peter Budaj's shoulder. Honestly, that goal was just one of those goals that you can't do a lot about; Michalek's shot was that good (you can read that sentence in Peter McNab's voice for added entertainment value, but it's still true). Before the Avs could get their heads around that tough goal, Sharks defenseman Christian Ehrhoff broke in hard against Brett Clark before dishing to the front of the net. All night long, San Jose's forwards crashed the net relentlessly, and this play was just the first to connect. The puck found Joe Thornton on the weak side. He couldn't put it in, but he was able to tip it to Devin Setogouchi. Just like that, the Avs were down 2-0 before the 10 minute mark of the first period.

Colorado cut the lead to 2-1 at the 14:24 mark. Paul Stastny (in one of the few good plays he made last night) won an offensive draw to the left of Evgeni Nabokov and dropped it back to Jordan Leopold on the point. Leopold let a good shot go and it deflected off of Ehrhoff's stick and past Nabby into the net. The Avs continued to pressure late in the first, but couldn't come up with the equalizer.

Whatever momentum the Avalanche took into the locker room during the first intermission evaporated when they hit the ice in the 2nd. San Jose was all over the Avs in the 2nd, and only some stellar saves by Peter Budaj kept the deficit at one goal. Thanks to Budaj, the Avs weathered the early storm and started to get pressure of their own...and then disaster struck. The Avalanche iced the puck around the 12 minute mark of the 2nd period. Last year, there would have been a TV timeout there to give the team some rest. This year, no timeout. Perhaps since Joe Sakic was one of the guys stuck on the ice, Tony Granato opted to save his timeout. Sakic won the draw cleanly, pushed it back to Scott Hannan...who promptly managed to turn the puck over leading to another Setogouchi goal. The Avalanche were gassed, and looked it on the play. But, if the TOI report is correct; (and they often aren't), Hannan was only 44 seconds into his shift (while Salei and Sakic were both over 1:30 into theirs). Either way, he needs to get that puck out of the zone. That goal was the killer. It wasn't the eventual game winner, but it was the one that cooked the Avs' proverbial goose on the night. And since we're talking about fatigue, it's also worth pointing out that, with almost identical EV ice time, the Avs had 38 less shifts than the Sharks. That means our guys were out there for a longer shifts. With the depth we have, that makes me scratch my head.

Down 3-1, the Avs came out in the 3rd the way they should have come out in the 2nd. They dominated from the early going, and got an early goal from Milan Hejduk (playing with Sakic and Wolski, as Tony Granato shuffled the lines frequently in the 2nd half of the game). But just a few minutes later, with the Sharks applying substantial offensive zone pressure, Adam Foote outletted to Darcy Tucker along the sideboards. Unfortunately, Tucker's stick was laying in pieces on the ice. Former Avalanche Rob Blake was aware of this and took the opportunity to pinch in. Blake took advantage of Tucker's hesitation (just get down and sweep the thing out, Darcy) to steal the puck. He threw it on net where, of course, two Sharks were headed. Michalek would get the tap in to make it 4-2. And that would do it. Liles scored (on a blistering shot through a Ryan Smyth screen) to make it 4-3, but Ryane Clowe answered to make it 5-3.

All night long, the Avs were pretty-good-but-not-as-good-as-the-Sharks. Several of the Avs looked good offensively - Smyth, Wolski and Sanjaya Arnason, for example - but didn't end up with anything on the scoreboard (well, Wolski had an assist). It's not news that the Avs haven't gotten terrific goaltending and defense, but the offense should be shouldering some of the blame as well.

According to texacogirl, Ian Laperriere lashed out at the defense after the game (thanks to Shane for spotting that). Hopefully, that acts as a wake up call to the team, because several blueliners (Salei, Foote and Leopold, to name three) are not playing as well as they are capable of. On the other hand, it could also cause a rift that divides the team. Either way, it should be interesting to see how the team responds. We'll see soon enough - the Avs travel to moustacheland tonight to take on the Blackhawks.