Wojtek Wolski and Marek Svatos Catch Lightning in a bottle 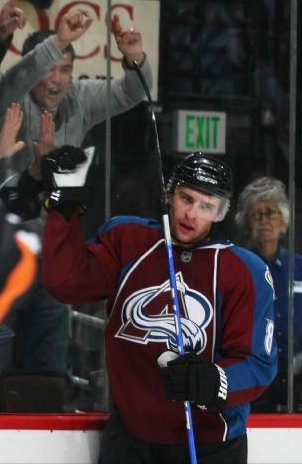 It's funny how one game can really change the complexion of a week. The Avs played 5 games from Saturday the 22nd and last night's tilt against the Lightning. They had two decent wins (LA and St Louis), a bad loss (Anaheim) and another so-so loss to the Coyotes. Drop another dud against the lousy Lightning, and the week is a write-off. Instead, the Avalanche won to salvage the week (3-2) and the month (6-7).

And, for a change, they did it with offense. The Avs were all over Tampa in the first period. Jordan Leopold opened the scoring with a PP goal 15 minutes into the 1st period. He made a great decision to go hard to the net after dishing to Marek Svatos while Svatos made an even better play to split the Lightning defense before getting the puck back to Leopold. Leopold now has as many goals (4) as the rest of the Avs defensemen.

After the Leopold goal, the newly reunited line of Arnason, Wolski and Svatos took over. Wolski scored twice in a 1:36 span to double his output on the year. The first came off of a draw - Arnason won it (he won 56%), Svatos grabbed it and fired it on net and Wolski, who had rushed right to the net, banged home the rebound. The second came when Arnason rushed up the right wing and layed a nice pass to the front of the net, where, once again, Double Dubya had headed right to. All three goals came when an Avalanche skated directly to the net when a teammate had the puck. Obviously, someone on the team read my recap yesterday...

While it looked like the Avs were going to begin a goal-scoring barrage, it never really materialized. Mike Smith replaced Olaf Kolzig in the 2nd period and stopped all 12 shots in the middle frame. He was almost perfect in 40 minutes of play, but his one mistake in the 3rd turned out to be the game winner - his attempt to clear the puck was blocked by a hustling Cody McCormick and intercepted by David Jones. Jones made some nifty moves on the way to the net and finished with a pretty top-shelf shot. Jones and McCormick were part of a new 4th line along with Cody McLeod and they played well together, albeit sparingly - they each had less than 7 minutes of ice time.

The Jones goal was important, as the Lightning had cut the lead in the 2nd on a rifle shot by Vinnie Lecavalier. Jones' goal 4:32 into the 3rd made it a 3-goal game again, but the Lightning made it close with two PP goals later in the 3rd. While the game probably shouldn't have been as close as it was, I thought the Avs played well at both ends all night long, and don't think the late Tampa goals was a result of going into any prevent mode. The Avs do need to stop taking stupid penalties - for the 3rd straight game, a Colorado player got a double-minor for high-sticking late in the game.

Andrew Raycroft got the start in net and won for the 3rd time this year (surpassing his 2007-2008 win total). Razor faced just 20 shots and should have stopped at least one of the three goals (you KNOW Peter Budaj would have gotten across on the Stamkos goal no matter how good the head fake from Lecavalier was). I'd really like to see Raycroft succeed, but this game won't push Budaj into a baseball cap. The Avs have a little more breathing room in their upcoming schedule, and it wouldn't surprise me if Raycroft's next start was on December 18th against these same Lightning.

I'd like to close with a little Cody McLeod appreciation. McLeod crushed Steve Downie in a fight late in the game, after Downie took exception to the big hit McLeod laid on him. It's often hard to gauge how much a player like McLeod is getting under the skin of the opposing team; much of that isn't captured by the cameras. You could see Minnesota players taking shots at him in the playoffs last year, but that's about it. But, when you see McLeod in a fight, it's not uncommon to see guys continue to take swings at him after he's down (like Downie did last night). That tells me he's pissing people off, even if we aren't seeing it ourselves. That might go a long way to explain why McLeod last night was playing his 82nd NHL game last night without ever being a healthy scratch.

Joe Sakic and Adam Foote were both out. John-Michael Liles returned after missing two days with the flu (Cumisky was a scratch) - other than one solid hit in the 3rd, Liles had a quiet game. Paul Stastny wore the A for what I'm reasonably sure is the first - but not last - time in his NHL career. He left the bench at one point in the 3rd after blocking a shot with his "lower body", but only missed one shift.

Arnason, Wolski and Svatos were the Avs best line. Remember, last year the trio had 30 points in 16 games together. If they can keep putting in games like this one, it should really help take some pressure off the Stastny line.

The Avs have traveled a lot this year. The Avs have had just one 3-game road trip and no home stands longer than two games. All season long, it's been a home game or two, then a road game, back for a home game, away for two, and so on. The Avs haven't played consecutive games in the same city since November 8th.