Is The Hartley Clock Already Ticking For Granato?

Share All sharing options for: Is The Hartley Clock Already Ticking For Granato? 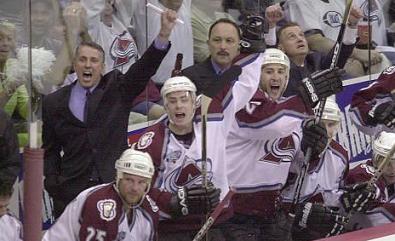 In 2002-03, the Colorado Avalanche had a deep, impressive lineup.  After a disappointing end to the 2001-02 season, the Avs were looking to make another run for the Stanley Cup, and it was Patrick Roy's final chance for a fifth championship ring.

Behind the bench was Bob Hartley, the fiery jerk responsible for the Bourque Cup of 2000-01.  To that point he had enjoyed considerable success as the head coach of the Avalanche, and the team had no reason to doubt his abilities as the 02-03 season got underway.

Unfortunately for him, somebody had switched on the mediocrity machine in the Pepsi Center and the Avs got off to a lousy start.  After 31 games, the Avs were 10-8-9-4 ("win-loss-tie-OT loss" for those of you who don't remember or were too young).  That crappy beginning proved enough for the Avalanche front office and Hartley was sent packing.  In his place, Colorado promoted new assistant coach Tony Granato to the top spot.

Granato seized the opportunity and ran with it, finishing the regular season with a 32-11-4-4 record and another divisional title.

But could Granato face the same fate as Hartley if the first 31 games (or some similar number) find the Avs in the dumps?  So far, after 12 games, the Avs are a lousy 5-7-0 and sit lonely at the bottom of the Northwest pile.  What if the team's win percentage stays roughly consistent and they find themselves at 12-19-0?  Does Granato get the ax?  Who would step in to bail the Avalanche out?  Are there any legitimate coaching replacements just floating around out there?

Or would the Avalanche front office stick with the Company Man for a full season and then part ways next summer?

Granato has had flashes of brilliance (at least on offense early in the season), but the defense inexplicably sucks and the special teams are mediocre.  And if the offense has a bad night (like they have for the past four games), there's little chance they can hang in there for the win.  How much of this is Granato's fault?  And how many more rhetorical questions can I ask in a single post?  One more?