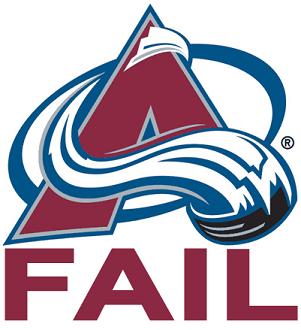 For just the second time in team history, and the first time since 1998, the Colorado Avalanche have lost five straight games in regulation.  Last night, the Minnesota Wild strolled into the Pepsi Center and shut down an offensive onslaught to prevail 3-1.

The Avs didn't lose for lack of trying.  They fired 36 shots on goal, including 12 in the scoreless third period and 14 in the second.  Unfortunately, Wild goalie Niklas Backstrom was in the zone, and stopped all but one shot.

With Joe Sakic out with a sore back, TJ Hensick got called up from the Lake Erie Monsters and managed to get an assist for his trouble, helping Darcy Tucker score the lone Colorado goal in the second period.  John-Michael Liles had the other helper.

The Avs were outdone by the usual culprits: uncoordinated defense, shoddy special teams and poorly supported goaltending.  Kyle Cumiskey filled in for a sick Scott Hannan on the blueline, but finished the game -1 after just eight minutes of ice time.  The penalty kill allowed one goal on three Wild power plays, and the Avs' own power play went an impressive 0-6, strangely reminiscent of last season's kitten killing holocaust.  Peter Budaj stopped 17 of 20 shots and further weakened his once-improving stats, previously boosted by an impressive three game win streak earlier in the season.

If the Avs lose two more games in regulation, they will set a new team loss streak record.  I guess knowing the team might be having a record-setting year will soften the pain of a 5-10-0 start.  Yeah, probably not.