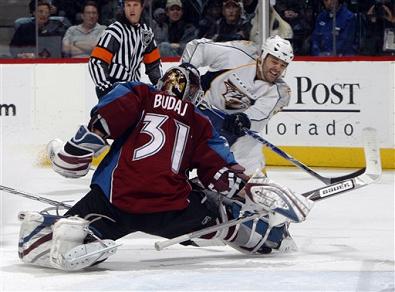 What a way to get back on the horse.  The Avs ended a five game skid by beating the Nasvhille Predators 1-0, Darcy Tucker continued his significant effort to redeem himself in the eyes of Avalanche fans by scoring the lone goal of the game, TJ Hensick scored his second assist in two games since being called up from Lake Erie, Peter Budaj got a much-needed shutout and Tyler Arnason was a healthy scratch.

Just in case you didn't catch that: Tyler Arnason was a healthy scratch.  There is justice in the world.

In less cool news, Joe Sakic managed only seven minutes of ice time before leaving the game with a sore back that doesn't seem to be getting any better.  Also, Cody McCormick was "excused from the team for personal reasons," whatever that means due to the death of his grandmother.  And the Colorado power play went 0-9.  Seriously.

For a recap, go here.

In getting their first shutout of the season, the Avs played a very good defensive game and, when there were a couple of breakdowns, Peter Budaj was there to make the saves in his sixth career shutout.

Budaj made some nice stops, too, including a point-blank chance by Predators defenseman Shea Weber in the third.

"We played better in front of him," Avs coach Tony Granato said. "We were better defensively for 60 minutes. We were better on the penalty kill. But that save on Weber — he was square, and that was probably as good a positioning as you can have in the slot."

Guess what, kiddos.  Peter Budaj is pretty much always positioned well---for the first shot he faces.  It's when the defense fails to clear the unavoidable rebounds that he gets beaten.  The same thing happens to all goalies who play behind weak defenses.  Rebounds happen, no way around it.  It's when the defense can't clear the puck or put a body on the opposing forward that the goalie gets beaten on the second or third chance.  Last night, the Avs didn't give up many second chances.  The result?  Peter Budaj stopped all 26 shots he faced and got a shutout.