This One's Dedicated to Larry Murphy 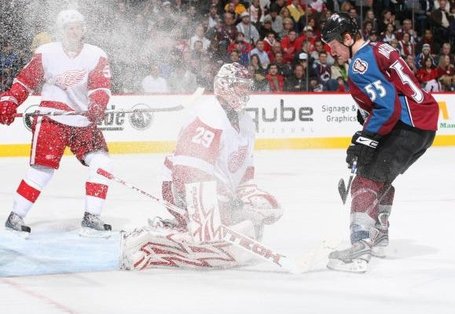 As I watch the Avalanche games on TV, I'm normally working up a story line for the recap I'm going to write the following game. By the end of the game, I usually have a decent idea of how I'll be opening the recap the following morning. From there, I'll happily go off on all sorts of wild tangents, but at least to start out I've got a basic theme in mind. With this game, there were too many story lines; I couldn't settle on just one.

The Avalanche appear to be gaining steam on the powerplay. With two PP goals against Phoenix and three more last night, five of the last 8 goals scored have come with the man advantage. Tony Granato is using just about everyone on the powerplay - 13 of the 18 skaters had at least one PP shift last night and I think I even saw Jacques Cloutier out there for a couple of shifts. The Avs are suddenly moving all over the place on the powerplay - both with and without the puck - and it's helping to create chances.

You've heard it many times before: Tomas Holmstrom and Ryan Smyth are two of the very best in the game in front of the net. Last night's game was a terrific example of this. The two were the best players on the ice for their respective teams, and were a factor in 5 of the 6 goals. Holmstrom scored on an incredible deflection of a Samuelsson deflection that was going wide of the net, and Smyth banged home a Milan Hejduk shot that was intentionally fired off of the rear boards. I hate the Wings, but I love to watch Holmstrom work in the crease. But, his best move may have been to shake off a Darcy Tucker hit at the Detroit blueline. As soon as Tucker had skated away to...well, I don't really know where he was going, to be honest...Holmstrom had his stick up to ask for an outlet pass. He started the play up the ice and got an assist a few seconds later after his pass to Rafalski at the point as crossed quickly to Johan Franzen. To call Tucker a defensive liability is a gross understatement.

For the 2nd straight game, the rested Avs were facing a team that had played the night before and then traveled to Denver (Peter McNab mentioned the other night that the Avs had 4 such games coming up). In Detroit's case, they traveled to Nashville during the day on Friday, played that night (and lost) and then flew after the game to Denver. In short, they were a little fatigued and it showed at the start of the game. The Avalanche really came out strong and the Wings were on their heels. Six of the first 7 penalties were on Detroit, and the Avs unexpectedly potent PP made them pay, with goals by Salei, Smyth and Liles.

My wife was watching the game with me, and I told her Detroit would be coming back. It wasn't so much that the Avs would start sitting on the lead (although they do tend to lose steam from their good starts lately, don't they?). I just knew that Detroit had too many weapons to not make a game of it. Somewhere around the middle of the 2nd period, the Wings found their legs, and all of a sudden the Avs were the ones chasing the play. The final four penalties all went against Colorado, and Detroit converted on two of them (in a 1:32 span). 14 minutes into the 2nd period, the Avs were still holding a 3-0 lead. Just over 4 minutes later, Johan Franzen's blast - the lone even strength goal in the game - had knotted things up.

As a related follow-up to Story Line #3, the Avs and Wings are tied for the league lead with 22 1-goal games each. And, they each have won 14 of those games (also tops in the league). The one difference is that the Wings have gotten a point out of more of their 1-goal games; they are 14-3-5 while the Avs are 14-7-1. The Avs' 7 1-goal regulation losses is also tops in the league - well, it ties them with Atlanta and, of all teams, Minnesota. The Avs are simply leaving points on the table in too many games this year. It sure looked like they were headed for another such game last night, which segues nicely into...

Budaj was a monster in the game. He was THE difference in the 3rd period when he turned aside 14 shots, including a really tough PP deflection that would have easily beaten Jose Theodore. Budaj is still perfect in overtime this year and, of course, he's still a pimp in shootouts (he and the post combined to stop all 3 attempts in the shootout). Tony Granato needs to do a better job of keeping Budaj from getting overused, but there is no goalie controversy brewing in Denver; Peter Budaj IS the most consistent starting goalie we've had since the retirement of Patrick Roy.

Speaking of Raycroft, I regrettably watched the Detroit feed. Let's just say Ken Daniels and Larry Murphy were certainly wearing their Red Wings underoos. Anyway, when discussing the goalies at the start of the game, Daniels mentioned that Budaj was getting the start even though Raycroft had won some games recently (including the first Detroit game). Daniels further expanded that he'd been told the reason for this was that Raycroft really hadn't played all that well in his win against Phoenix. That's true, of course, but I wonder which Avalanche guy shared that with Daniels? Interesting...

Finally, we get to my personal favorite. Daniels and Murphy were rather unbearable during the game, partly because of their obvious Detroit slant and partly because they didn't seem all that prepared to cover the Avs. When the game went to overtime, Murphy started blathering that the Avs would press hard to win in OT because they didn't want to have to face the Wings in a shootout. He and Daniels repeated that as the shootout was starting, and then began talking about our best player in the shootout: Marek Svatos. This is as Wojtek Wolski was preparing to make Ty Conklin his bitch for his 6th succesful shootout attempt in 7 tries. The Avs, of course, improved to 7-1 in the shootout this year, while the Red Wings fell to a still-impressive 4-1. I'm guessing Daniels and Murphy won't be so cocky the next time (I'm not even going to address the part about how the Avs would miss Paul Stastny in the shootout. Idiots.)

The Avs' shootout success is amazing, especially given their lack of depth. For crying out loud, the Wings had Marian Hossa as their 4th shootout option. After the Avs big 3 (Wolski, Svatos and Hejduk), the Avs are incredibly thin - so thin that Ryan Smyth and Darcy Tucker have the 4th and 5th most attempts on the team (3 and 1). Wolski and Budaj get a lot of the credit here. Wolski is consistently giving the Avs the early lead in the shootout, and then Budaj makes enough big saves (.708%) to close the door.

Tyler Arnason did indeed play on the first line with Hejduk and Smyth and he didn't embarrass himself, getting 5 shots on the net. However, Smyth and Hejduk do a lot of work below the goal line, and Arnason just isn't that sort of player - several times he simply got pushed off of the puck while the Avs were trying to cycle. Personally, I'd rather see Arnason work with guys who do better work in front of the net - Svatos and Wolski, for example - and then try someone like TJ Hensick with the first line. I doubt it will happen, though, as Hensick remains firmly in Granato's dog house. He was dropped from the 2nd line after just 7 shifts; after the first period, Ian Lapperiere moved up to the 2nd line and Hensick dropped to the 3rd.

The Avalanche host the Predators on Monday. Once again, Colorado will be playing a tired team - Nashville is playing in Edmonton the night before.

Let’s hope this one turns out better than the one December 15th. - Bill Houlihan (before the game), Abel to Ysebaert.

[Wolski's] move, though, is a goalie's nightmare. With his long reach and lengthy stick, he acts as if he's going far to the right, only to pull it back left. Ty Conklin was sprawled out on the ice as Wolski effortlessly guided the puck into the net to help the Avalanche improve to 7-1 in shootouts this season. - Pat Graham, AP

"Let's be honest, we should have won that game," said Wings coach Mike Babcock. "We were all over them. But they found a way to win in a shoot-out. Their power play got them three goals." - George Sipple, Detroit Free Press

The story of the evening was the penalties and consequent power-play goals. All of Colorado's goals in regulation came in three separate power plays during the first period. Salei scored the first goal of the game while Ryan Smyth and John-Michael Liles would add a goal and an assist each on the following two goals. Detroit received six of the first seven penalties in the game. - Christy Hammond, Winging it in Motown

Ty Conklin settled down after a rough first period and had 29 saves. He was starting in net for the fifth straight game as Chris Osgood is sidelined with a strained groin. - AP

Some things in life are predictable. It will snow in the Rockies in December. Thousands of red-clad former Michigan residents, none of whom plan to move back soon, will show up for Red Wings games in Denver — as they did Saturday night. And when one NHL team gets a flurry of power plays, as the Avalanche did in the first period, the skate will be on the other foot soon. - Terry Frei, Denver Post

Do you know who whines about terrible ref jobs? The losers. - Shane Giroux, Avs Talk

"[Arnason] did pretty well," Colorado coach Tony Granato said. "I think Ryan and Hedgie skated extremely well, and Arnie will understand it's pretty easy to play with those two guys when they're going like that. I thought for the first game together, they did a pretty good job. - Terry Frei, Denver Post

Granato has not allowed sometimes shaky goaltending to destroy the team's confidence, and more important, he has not trashed Budaj as a convenient scapegoat. The coach has not been afraid to call out Tyler Arnason for lack of production, only to show enough faith in the 29-year-old veteran to center the No. 1 line against the Wings. And the refusal to let injuries become an excuse for failure begins at the top. - Mark Kiszla, Denver Post

Know what to do when a top two defenseman loses his stick. Don’t make him ask for a stick. Seriously, I heard Adam Foote ask for a stick, and I was watching the game on my laptop. - Tapeleg, Jerseys and Hockey Love [I didn't hear Foote, but after several seconds of me staring incedulously at the screen, heard someone from the bench strongly suggesting that TJ give him his stick]