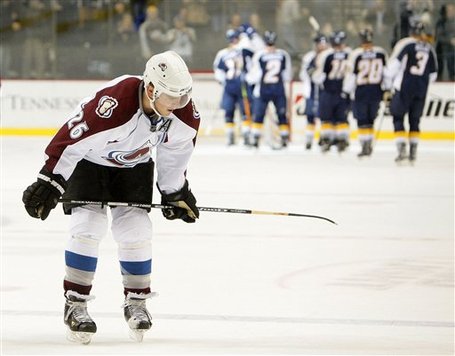 In case you missed last night's action, I've recreated a few of the key plays from last night in the form of madlibs:

Those are your three plays of the night. All the scoring happened in the first period. The Predators scored first when Karlis Skrastins Ruslan Salei made a stupid attempt to knock the puck out of the air at the blueline, leaving Vern Fiddler (what a great name) all alone in front of Peter Budaj. Salei made up for it a little later, when his point shot on the powerplay deflected in off of Ryan Smyth. Then, Shea Weber fired his own powerplay blast, this one going in off the hands of Brett Clark (that had to hurt). Wojtek Wolski tied it again at the 16:22 mark when he and Cody McCormick forced a turnover in the Nashville zone and scored the first shorthanded goal for the Avs this year. It looked like both teams would go into the locker room tied up, but the Avalanche got sloppy in the waning seconds of the period and allowed Dan Hamius and David Legwand to hook up on a goal with a ridiculous .3 seconds left.

And that was it. That lapse in effort and judgment gave the Preds the game winning goal. Both teams shored up their defense in the 2nd period; in the final two periods, the Preds had just 13 shots, the Avs just 15. I thought Nashville's defense was exceptional last night - every one of their six blueliners made a strong play at some point to diffuse a Colorado scoring chance before it could really develop. And Nashville's Jordan Tootoo was a huge factor early on. He knocked Brad Willsie out of the game early, and then was chased down by Ian Laperriere after he smothered Danial Tjarnqvist in the corner. Laperriere crosschecked Tootoo and then dropped his gloves and attempted to fight him. Tootoo just skated away as if nothing had happend. Lappy got two penalties on the play and that led to Weber's goal. I'm not a huge Tootoo fan, but that's exactly what he was in the game to do.

For the Avs, it wasn't really a terribly bad game or a terribly good game. After the thrilling win against Minnesota on Monday, the Avs looked disappointingly flat to start the game, and never really got things going. Paul Stastny had 4 shots to give him 11 in the last two games, but in general the Avalanche offense was kept in touch by the Predators defense.

Up front, we had the same line combos for the 3rd straight game. However, Willsie limped off after getting hit in the knee by Tootoo on his 2nd shift in the game. Since Kyle Cumiskey was the Avs only healthy scratch last night, the Avs are likely to call someone up today, and I have a feeling it's going to be Chris Stewart - he has 11 points in 19 games in Lake Erie. That's 4th on the team, but two of the guys ahead of him in scoring - Hensick and Willsie - are already up.

On defense, the pairings were changed to:

In the 3rd period, Granato and Jaques Cloutier moved Hannan back with Clark and Tjarnqvist back with Leopold to bring us back to the pairings we've been more acustomed to lately.

The Avalanche visit the Dallas Stars tonight. The good news is that the Stars are in last place in the West (you might call them the sloppy seconds of the conference). However, the Stars are just 2 points behind Colorado. If the Stars win in regulation and the Kings and Blues both win tonight, the Avs would then have a share of last place. The good news? The Stars have allowed 92 goals - only Toronto has allowed more (94).

"Three-tenths of a second was the difference for the Avalanche on Thursday night between extending a winning streak to three games or dropping yet another close decision and again falling under .500 for the season." - Rick Sadowski, Rocky Mountain News

"Laperriere confronted Tootoo after Tootoo's hit on Avalanche forward Brian Willsie on Willsie's second shift of the game left him unavailable the rest of the night. Tootoo later drove Colorado defenseman Daniel Tjarnqvist into the boards from behind. After cross-checking Tootoo, Laperriere shed his gloves and grabbed Tootoo, but the Predators winger didn't respond to that challenge." - Terry Frei, Denver Post

"Injuries are piling up for the Avalanche, which lost forward Brian Willsie to a left knee injury in the first period on a hit by Nashville's Jordin Tootoo. Willsie is expected to miss tonight's game in Dallas." - Rick Sadowski, Rocky Mountain News

"On the night he became the franchise's all-time leader in games played, David Legwand played the kind of game the franchise would love to see for the rest of his tenure in Nashville." - John Glennon, The Tennessean