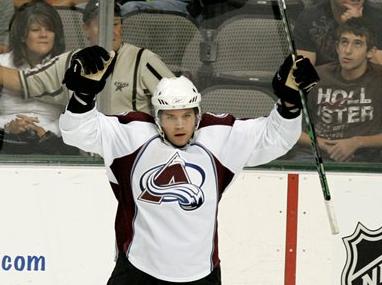 The Colorado Avalanche didn't play most of their top players, but it didn't matter at all.  They still beat the Dallas Stars 4-2 in their second pre-season game.

Unlike in Wednesday's game against the Kings, the Avs didn't take an early lead.  Mike Ribeiro scored eight and a half minutes into the first period, but Brian Willsie answered with an unassisted goal less than two minutes later.  The Stars were threatening though, taking thirteen shots in the first period compared to just five for the Avs.  Peter Budaj had another strong showing in goal, allowing only Ribeiro's score.  He was pulled in the second period having allowed one goal on seventeen total shots.  Andrew Raycroft would finish the game.

The Avs took the lead just forty seconds into the second period when Ryan Smyth scored his third goal of the pre-season, getting help from Daniel Tjarnqvist and TJ Hensick.  Unfortunately, Raycroft's only screw-up came with just thirty seconds left in the second frame, when he allowed Brendan Morrow to score on a power play.

Tied going into the third period, the Avs noticeably turned up the tempo, out-shooting the stars seven to three, and managing two more goals.  TJ Hensick scored the eventual game-winner, taking a feed from Ryan Smyth and Chris Stewart on a power play to move the Avs up 3-2.  Matt Hendricks would seal the deal with an empty-netter at the tail end of the game.

Notable moments of the game included Cody McCormick wiping the ice with Nolan Pratt just a minute and a half into the game, a boarding penalty by Cody McLeod in the third period and an assist by Tyler Arnason on Hendricks' open-netter.  Hopefully we see more of the same from McCormick and Arnason, and less of the same from McLeod.

Oh, and I'd be remiss without calling out Tracey Myers of the Fort Worth Star-Telegram for questionable star assignments.  The Avs won the game by two goals, yet Mike Ribeiro and Brenden Morrow were named two of the three stars.  The only Av was Ryan Smyth, and he wasn't even the first star.  Hensick scores the game-winner and he doesn't make the list?  Really.  Maybe it has something to do with her apparent infatuation with Ribeiro and Morrow.  And I don't mean infatuation in a sexist, chicks-shouldn't-be-reporters kind of way, but in an Adrian-Dater-Wants-To-Make-Out-With-Peter-Forsberg kind of way.  She posted a blog post about how cute they are together and a puff piece that barely mentioned that the Stars lost the game and are sucking in the pre-season.

But hey, to each their own.