Share All sharing options for: Frozen Fury: Avalanche 4, Kings 3 (SO) 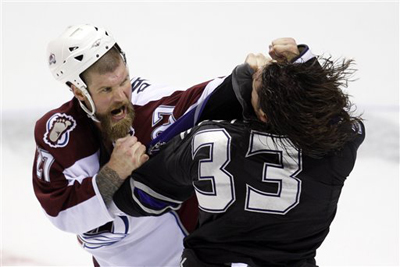 The now-annual "Frozen Fury" pre-season matchup between the Kings and Avs really lived up to its name this time.  In fact, it appears the teams (especially Los Angeles) spent more time fighting and sitting in the penalty box than playing actual hockey.  The Avs managed to win 4-3 in a shootout.

Matt Hendricks started the scoring in the first period, making quite a case for himself in the pre-season.  He had a goal in game two against the Stars, as well.  Ben Guite hooked him up with an assist on the shorthanded tally.  Darcy Tucker, also putting some fears to rest, made the game 2-0 when he scored thirteen minutes into the first.  Unfortunately, Andrew Raycroft (who played the whole game), allowed the Kings to come back and tie it prior to the first intermission.

In the meantime, all hell was breaking loose.  Chris Stewart fought Kevin Westgarth.  Then Cody McLeod fought Wayne Simmonds.  Then Scott Parker and Westgarth got into it (see photo above).  By the end of the first both teams had amassed 38 penalty minutes and the refs sent Simmonds off to the showers.

In the second, the quantity of violence was down but the quality (so to speak) was up.  Dustin Brown got a high stick up on somebody and drew blood, because he got a double minor.  Not sure who since the NHL apparently keeps no stats for the Frozen Fury every year.  Then Ian Laperriere tangled with somebody named Drew Bagnall, Dustin Brown got another high sticking penalty, and Cody McCormick speared somebody.  That sent him to the showers early.

Oh, and Raycroft gave up a goal (on just three shots) and the Kings took the lead.

And if you think things calmed down in the third period, well, you'd be wrong.  Adam Foote managed two minor penalties and a game misconduct, Darcy Tucker got two roughing penalties and a double minor for slashing (in a stick fight with Brian Boyle), and Lappy managed a slash of his own for good measure.

Also worth noting: Jordan Leopold scored to tie the game and send it to overtime.  Assist by Sakic.

Raycroft managed to shut things down in overtime and the skills competition, and TJ Hensick won the game with the only shootout goal for both teams.  Raycroft finished with 24 saves on 27 shots.