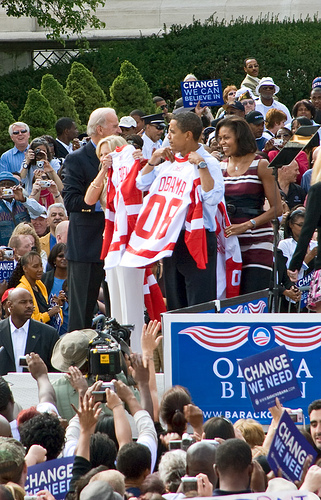 On September 9th, it looked like Barack Obama had the Colorado vote all wrapped up when Sarah Palin went swaggering around holding a Red Wings jersey.  Sure enough, Obama's poll numbers went up in that battleground state, to the point that he now enjoys a comfortable lead.  But, as seen in the photo above, he's tossed all that achievement aside just to pander to the unwashed savages of the wretched hell hole that is Michigan.

Also unfortunate: I now won't be voting in the election.  But considering some of the really stupid reasons people have for choosing a candidate, I suppose my reason for sitting this one out is perfectly legit.

Rooting for the Red Wings is not The Change We Need.