I can't believe I'm doing this

Share All sharing options for: I can't believe I'm doing this

This post happens to be the 600th here at ITCS. I briefly tossed around the idea of doing something special for the milestone but, instead, I'm writing to defend...I'm not sure I can even type this...Tyler Arnason. 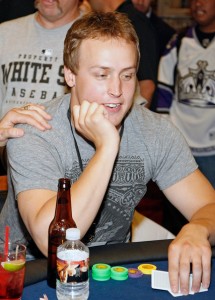 You can't get very far on this whole interweb thing without finding someone who is critical of Arnason's play. In fact, you could probably just search this site (I'm too lazy to do so) and find enough anti-Arnason rhetoric to last for days. And now that TJ Hensick is making a strong case for a spot on the roster (and, presumably, the 3rd line), the shouting is getting stronger. Just trade Arnason and a 2nd-round pick for <insert name of good player here>. If that doesn't work, just give him away.

I'm not in agreement.

Tyler Arnason is not, nor will he ever be, a consistently good player. He disappears from games, isn't good at draws, doesn't play defense, and throws his body around with the reckless abandon of an old lady with severe osteoporosis. Oh, and while most of us would sleep with Joan Rivers for a chance to play professional hockey, he often has a look on his face that ranges from bemused indifference to "I'm scheduled for a colonoscopy after the game".

But, while he's not a great player, he is a talented player. And I tend to be really hesitant about letting a talented player walk, especially on a team that is so heavy in the, uh, heavy department. Arnason has had some good stretches (I'll skip the broken record bit about how key he was in the Minnesota series). I've said this before, but I think one of the biggest problems is that he has yet to be a healthy scratch with the Avs. The threat of watching the game from the pressbox may not work for everyone, but is there any reason Joel Quenneville didn't want to try? I may be a little like Charlie Brown trying to kick a field goal here, but I do believe with the right coaching and motivation, Arnason's game could really come around. Perhaps the decision to designate Arnason an assistant captain in a preseason game last week is an indication that Tony Granato is already working the puppet strings.

And if it doesn't work? I think there's still enough flashes to use him on the 3rd line - perhaps with a linemate whose first name isn't "Cody". TJ Hensick is going to get his chance, and that time will be sooner, rather than later. In the meantime, I'd like to give the Unsimiling One another chance.