The Avalanche get a lesson in "You're Doing it wrong" 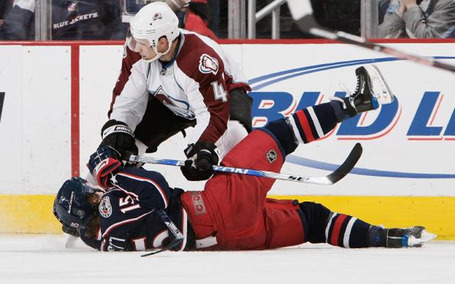 We lost the game, but I'm still smiling over this hit

There was a time when the Colorado Avalanche owned the Columbus Blue Jackets. The Avs were the much older big brother to the Blue Jackets younger sibling, and when the two brothers wrestled around on the floor before dinner, it was never any contest. Colorado was 19-1-2 against the BJs at one point; they stole so many of little bro's toys that they needed to store some of the extras in a box in the attic.

Well, little brother has grown up and is now able to kick big brother's ass. Soundly. The Blue Jackets have won 6 of the last 9 games against the Avs, including a 4-3 squeaker game that probably shouldn't have been that close last night at Nationwide Arena in Columbus. The embarrassing part is that the Blue Jackets are doing a lot of things the Avs should be doing. I hope big brother was taking notes last night.

Like the Avs, the Blue Jackets are without a bunch of their best players and have all kinds of youngsters filling out the roster. Unlike the Avs, the new players have a well-defined system to step into and can help their team with hustle and by knowing their role. The Avs didn't play terribly, but they were simply outworked, outhustled, outplayed and outcoached by one of the few teams the Avs have played lately with less talent on their roster.

It was mostly a defensive game - the kind of game Ken Hitchcock had said he was looking for. After two periods, it was knotted up at one even though both goalies - Steve Mason and Andrew Raycroft - were looking a little shaky (barely 5 minutes in, Danny Gare described Razor as "sloppy", which was spot on). But the Avs were lucky to be tied - the Blue Jackets were getting twice as many scoring chances as the Avs were.

In the 3rd period, the dam finally burst. Brian Willsie got called for hooking at the 5:42 mark (a ridiculous call to be sure, but still) and the floodgates opened: in the next four minutes, 5 goals would be scored with a couple of other scoring chances just missing. First up was RJ Umberger with Willsie in the box. Scott Hannan and Cody McLeod were unable to contain Kristian Huselius on the sideboards, Ruslan Salei was giving far too much room to Kris Russell and Ryan Smyth - not the fleetest of skaters - was unable to get back from deep in the Columbus zone to puck up Umberger. It was an easy tic-tac-toe play for Columbus and it shouldn't have been.

50 seconds later, the Avs caught a break when Chris Stewart's dump in shot was muffed by Mason and we were tied again.

But not for long. 35 seconds after that, Huselius scored just seconds after Jaret Boll had executed a Ryan Smyth to perfection - skating by and bumping Raycroft's stick. Yeah, sure, it would have been nice if the ref had seen that (I'm sure Columbus was really pleased to see the Avs get a taste of their own medicine). Still, the Avs were skating around like chickens with their heads cut off on the play. I have no idea who was supposed to be covering who, but Salei was on Huselius and then left him all alone to follow Hensick into the corner to pressure Malhotra. It wasn't pretty...unless you were a Columbus fan.

30 seconds later, the Avs have the puck in their zone but Milan Hejduk turns over the puck. The Blue Jackets swarm into the zone and the Avalanche never recover and the play leads to a goal from Mike Peca. That would be the game winner. Ryan Smyth would score a powerplay tally a little over a minute later (the Columbus feed showed neither the goal nor the penalty because they were showing some bullshit interview with Pecahead), but the Avs, of course, couldn't manage the equalizer. Frankly, if Mason hadn't been shaky on a couple of goals, they wouldn't have even been within striking distance. I don't think the Avs were terrible in the game...but I do think there was a better team on the ice.

I also have to mention the Columbus crowd, which was extremely vocal in the game. Yes, they are getting pumped up for a rather silly reason (with the win, the BJs moved into the playoff picture in the West), but man it's great to see a crowd anywhere that excited for their team.

Lather, rinse, repeat. Tyler Arnason seems to have shifted from "not producing" to "actively seeking to ruin scoring chances". He needs to be benched immediately. While I'm making some executive decisions, can we also put the kibosh on Darcy Tucker getting key ice time in the final minutes of the game? K, thx.

Meanwhile, David Jones left the game early with a sore back. Apparently, Ben Guite has recovered from his week-long mystery illness and was actually a healthy scratch last night (is that a reflection of his play, the play of Philippe Dupuis or a bit of both?)

The Avs visit St Louis to take on the last-placed Blues (because, 11th is something to brag about).

The Avalanche on Tuesday night had a chance to move into seventh place but dropped from eighth to 11th thanks to a wild 4-3 loss to the Columbus Blue Jackets at Nationwide Arena before an announced crowd of 15,343. - Rick Sadowski, Rocky Mountain News

As the red light came on at 8:41 of the third period Tuesday night, signifying that Kristian Huselius' shot had gone in the net, Avalanche goalie Andrew Raycroft raised his arms and then appealed to the nearest man in a striped shirt.Neither Raycroft's symbolic protest nor the Avalanche's arguments carried any weight with referees Eric Furlatt and Gord Dwyer, however.They didn't agree that Columbus winger Jared Boll had interfered with Raycroft in the crease, and Huselius' goal stood, breaking a 2-2 tie in what turned out to be the Blue Jackets' 4-3 victory over the Avalanche at Nationwide Arena. - Terry Frei, Denver Post

In the end, the Avs got a little sloppy, the BJs capitalized and there wasn't enough time for the Avalanche to recover. - Shane Giroux, Avs Talk

Because winger David Jones' back stiffened up, the Avalanche skated a forward short for the later stages of the second period and all of the third in a 4-3 loss to Columbus on Tuesday night. Jones had been on the Tyler Arnason-centered third line and was coming off a two-goal game against Pittsburgh on Saturday. After the game, Colorado coach Tony Granato said he hoped Jones would improve and possibly be available for Thursday's game at St. Louis.- Terry Frei, Denver Post

[Derek] Dorsett was penalized for boarding with a hard hit that shook up Tucker, and the two nearly came to blows after Dorsett exited the penalty box and went on a breakaway that goalie Andrew Raycroft stopped. - Rick Sadowski, Rocky Mountain News

"When I saw (Stewart) coming, I stupidly adjusted my helmet at the last second," Mason said. "It kind of blurred my vision. That was just stupid of me." - Aaron Portzline, Columbus Dispatch

Adam Foote was on IR and didn’t make the trip, so it didn’t turn out to be quite the hate-fest against the ex-captain that all I had hoped for (although there was an impressive array of anti-Foote signs on display), this was still a good game to get me back into the habit of going to Jackets games after a two month absence. - Sarah Riegel, Neutral Zone Trap

Now, let’s take a look at Foote.  He WAS my favorite player, he wore the ‘C’ for the Blue Jackets, and he was expected to lead the way for the Jackets to make the playoffs for the first time in franchise history.  The deadline came, and Foote was gone.  I will be honest, I had put my heart and soul into this team, and I was so upset when he left - tearful conversations followed.  But, then, the real story began to come out. - Bethany Porter, Bethany's Hockey Rants

Former Blue Jackets captain Adam Foote, public enemy No. 1 in the eyes of many fans, might miss Colorado's game in Columbus on Tuesday because of a triceps injury. After Foote went out of his way last week to avoid an interview with The Dispatch, which reported how far he went to force a trade to the Avalanche last winter, it has been suggested that Foote might be suffering from Blue Jackets flu. - Bob Hunter, Columbus Dispatch