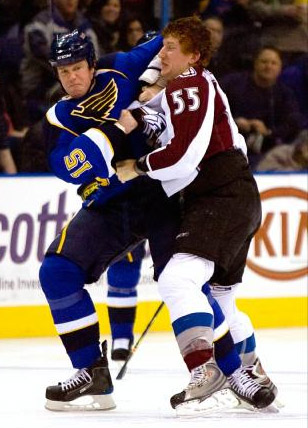 I'll be honest up front. I was really tired last night and the prospect of watching another dull Avalanche - Blues tilt after getting home from work at 11:30 last night was about as attractive to me as...well, I can't think of many things less attractive to me right now. So, last night's game was watched with a healthy dose of the fast forward button, and even then I dosed through some parts.

Here's the important part: we lost again. We didn't look all that great and Peter Budaj laid an egg. And you know what? That's how it's going to be. The Avs will continue to vacillate between lukewarm and tepid for the rest of the year. If we're lucky, they'll start to get hot at the end of the year when they finally have a full contingent of players, but I'm not sure we can count on even that. The Avs are a decent team swimming in an ocean of decent teams; hopefully, they'll be one of the 8 that gets tossed up onto the beach at the end of the year. Other than Calgary, the NW division is decidedly mediocre at the moment. Had they won last night, they'd be playing for a chance to tie Vancouver in 2nd tonight. Instead, they could wind up anywhere from a share of 3rd to sole possession of last tomorrow morning. Get used to that - this roller coaster is just getting started.

I'm not going to go into more detail on the game. Instead, I'm going to focus on two other things only sort of related to the game - one bad, one good.

First, Cody McLeod and Brad Winchester fought each other right off the opening faceoff (pictured above). It was a good fight, but, to be honest, these types of fights really bore me. It was obvious that they had worked that out in advance and that both teams knew it was going to happen - Chris Stewart and Brad Boyes did not even move when the puck was dropped. I'm a regular male; I like steak dinners, hockey fights and naked women (and not necessarily in that order), but I find these scheduled fights to be rather dull in general. I'm not trying to diss McLeod, as lots of guys do it (Ian Laperriere, of course, is one of the guys most known for it). I understand that they are trying to fire up their team, and I respect them for having the balls to subject themselves to all that punishment. I don't mind the angry fights resulting from a big hit in the game (Stewart pummeling Tyson Strachan, for example), but these "hey, will you fight me? yes? no? maybe? TIA" stuff is just boring.

In happier news, I couldn't help but notice that the Scottrade Center has an organist. I think that must be new(-ish) because I seem to recall music blasting in the past. Even watching the game on TV, it's so enjoyable to hear an organ instead of music. And I'm a music fan. If I remember right, the Blues people played some of the best hard rock during the game of any team. But no matter how much I like Wolfmother, an organ is SO much better. All baseball and hockey venues should ditch their mp3 players and go with an organ.

I'm going to start including the Avs' shift chart here. This one doesn't look all that hot because of the resizing, but I'll work on that in future recaps to see if I can get it to look a bit better. Clicking the image should take you to the ITCS report. 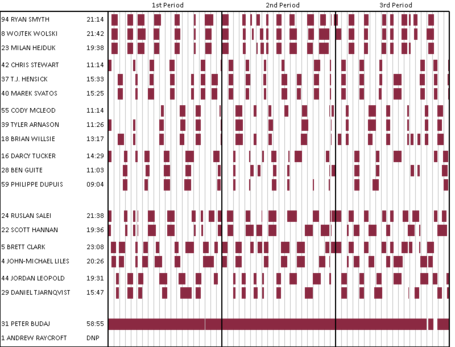 The Avs host the Oilers tonight. This kicks off the infamous 8-game homestand. The Avs next road game is 3 weeks from tomorrow, again in St Louis. I don't think I need to type here that these next 8 games may make or break the Avs season. Oops, I did it anyway.

I was so pumped about this game that I missed the first 30 minutes because I was shopping. That's right, shopping enthralled me more than the prospect of a game against the St. Louis Blues. - Shane Giroux, Avs Talk

Pathetic, pathetic performance by the Burgundy and whatever-colored Blue last night. Once again, Manny Legace, he of the .887 saves percentage coming in, looked like a hybrid between Jacques Plante and Patrick Roy against the BWCB. Adrian Dater, All Things Avs (with the subtle hat tip to jibblescribits)

Patrik Berglund scored his 14th goal to take the lead among NHL rookies, Cam Janssen notched his second career marker and the Blues scored two power-play goals in the third period to earn a 5-2 victory Thursday night over the Colorado Avalanche. - AP

Seeing the Colorado Avalanche cut the Blues' three-goal lead to just one in the third period was too much to handle for many in the crowd of 17,545 at Scottrade Center on Thursday night. But Blues goaltender Manny Legace said, "You just can't lose your cool and I don't think we lost our cool." - Jeremy Rutherford, St Louis Dispatch

After Legace's record in 18 career games against Colorado improved to 14-3, the long-time member of the Red Wings again displayed his dry and self-effacing sense of humor when downplaying the early save. Svatos got off a wrist shot from the right-wing circle after T.J. Hensick slid him a pass on an odd-man rush. "I just want to say thank you to (Svatos), he hit my glove," Legace said with a smile. "I came across and he put it right in there." - Terry Frei, Denver Post (ouch)

"I don't think it was one of his better games." Granato, on Peter Budaj, who allowed four goals on 25 shots. Rick Sadowski, Rocky Mountain News

As much as I love Peter Budaj, he is starting to wear out his welcome very quickly in my mind. Three out of four goals the Blues scored tonight (not counting the empty netter) were just plain awful. Just like the beginning of the season, that five hole is killing him, and the team's chances to stay in games. - Adam Hersh, An Avalanche of Thoughts

Granato said defenseman Adam Foote (triceps) and forward Ian Laperriere (back), neither of whom made the two-game trip, are showing improvement but “probably” won’t play against the Oilers. - Rick Sadowski, Rocky Mountain News