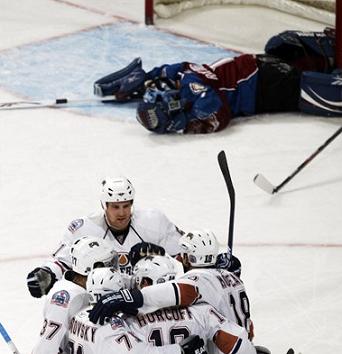 Short recap today, due to David's absence and my constant lack of any free time whatsoever.

Not too long ago the Avs were moving up the Northwest Division standings, and clinging to the 7th and 8th playoff spots in the Western Conference.  They had won three games straight and were three games above .500.  Now, after the Oilers beat them 3-2 at home last night, the Avs have lost three straight and are back to where they started: a boring .500 record of 22-22-1.

The Avs fell behind early in the game, when a booming Steve Staios slap shot managed to get knocked down and then trickle past Andrew Raycroft to move the Oilers up 1-0.  How nice would it be for the Avs to have a defenseman like Staios who could put booming shots on net and create chances like that?

Colorado got back in the game in the second half of the first period, though, with the help of an unlikely player.  Tyler Arnason scored his third goal of the season (his first since OCTOBER) with help from John-Michael Liles and Cody McLeod, tying the game at one all.  That tie would be short-lived, though, when a brain fart by coach Tony Granato resulted in a too-many-men penalty and an Oilers power play.  Tom Gilbert scored with just 30 seconds left to play, and Edmonton moved up 1-0.

The second period was mostly back-and-forth, with a lone goal being scored by TJ Hensick to move the Avs back into a tie.  Unfortunately, the Avs only win when they have the lead after two frames, and a tie just won't do it.  Sure enough, in the second half of the third period, Raycroft misplayed an Edmonton rush and got beat by Shawn Horcoff.  Edmonton goalie Mathieu Garon held off the Avs' late pressure to win the game.

Overall, it wasn't a horrible performance by the Avs, but the top line was ineffective again and Rayzor had a relapse of sorts.  A day after Peter Budaj played like crap, the Avs' apparent goaltending savior failed to deliver as well.  Raycroft has lost his last two starts.

The Avs continue an 8-game home stand tomorrow against Calgary.  Losing another game to a division rival at this point in the season, with the Avs' record what it is, could be the first nail in the coffin for their playoff hopes.