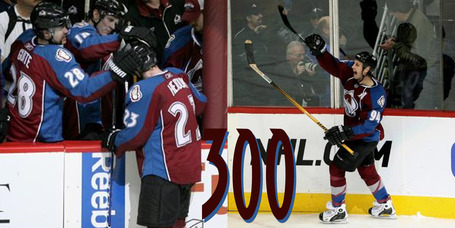 "I will say this: a LOT of Avalanche forwards had a very strong game against Edmonton on Thursday. I'm not guaranteeing it, but it wouldn't shock me to see the Avs put up a bunch of goals tonight." - Some random blogger

Okay, that random blogger was your truly and it wasn't quite on par with Joe Namath. But I really felt the Avs offense was going to bust out last night, and so they did as they topped the Flames 6-2. The Avs had no wins in 4 tries against Calgary going into the game, and they'd only managed 1 goal in the last 3 games against them, so this little offensive burst was great to see.

The big story of the game, of course, was Ryan Smyth and Milan Hejduk each netting their 300th NHL goal. Smyth went first, with the game-changing (and game-winning) goal 13 minutes into the 2nd period. The game was 2-1 at that point and the Flames were threatening to come back. Just 2 1/2 minutes before, they had scored on the PP and Ruslan Salei was in the box (again). But Smyth found a rebound on his stick and raced down the right wing. In a recreation of a goal scored earlier this year against Phoenix, Smyth faked pass, staring at Ben Guite the entire time before firing a no-look shot past Curtis McElhinney.

Just a few minutes later, the Avs were on the powerplay and you almost knew it was coming. While Smyth's goal wasn't exactly a typical Ryan Smyth tally, Milan's 300th was vintage Hejduk as he beat McElhinney from the left wing slot. Hejduk is the 4th player in franchise history to score 300 goals (joining Joe Sakic, Michel Goulet and Peter Stastny are the others). He and Sakic are the only two to hit 300 since the Nordiques relocated to Denver.

It was only the 2nd time in NHL history that teammates have scored their 300th goal in the same game (Ivan Boldriev and Danny Gare did it in 1983). The goals fired up the Pepsi Center crowd, and the pair shared the number one star option in the game. They were also big goals in the context of the game - Smyth's was the game winner and Hejduk's essentially sealed the win. But let's not forget that the Avs scored six goals for just the 3rd time this year. Three lines got into the goal scoring action and the outburst wasn't a case of a team beating up on a backup goalie: McElhinney faced 39 shots and made a bunch of beautiful saves, especially early on.

He wasn't the best goalie in the game, though. That honor goes to Peter Budaj, who reminded a few people that the game is played on the ice, not in the notebook of a reporter. Budaj turned aside 39 shots on the way to breaking his personal 4-game losing streak. The Avs played very well in this game, but were struggling early to build on their 2-0 lead. Budaj made some great saves to keep his team in the lead. I'll go out on a limb here and venture that none of his teammates gave a rat's ass last night about Budaj's quote. Quotes don't win (or lose) hockey games..but Budaj's play in net certainly helped do the former last night.

David Jones and Philippe Dupuis are still banged up, so Chris Durno appeared in his first NHL game. Durno had a nice game, notching 3 shots and 2 hits. And he may already by the best #45 in Avalanche history (with apologies to John Slaney, Rick Berry, Jeff Daw and Steve Brule).

Kyle Cumiskey also played in his 2nd straight game - this time solely on defense (he split time against Edmonton at forward and defense). 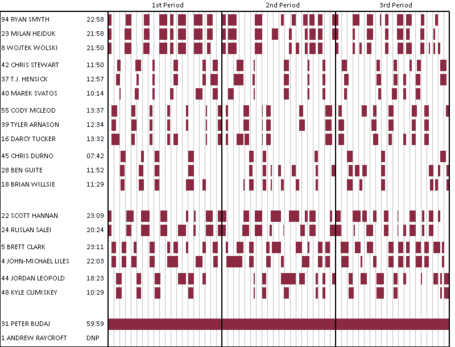 The Avalanche host the LA Kings on Wednesday, the last game before the All-Star break (and a game the Avs absolutely, positively, without a doubt, unquestionably need to win). After Wednesday, the Avalanche have 6 days off and play again next Tuesday against San Jose.

They play on the same line, sit side by side on the bench and spend their time on the ice setting up each other for scoring chances. So it was fitting that Avalanche forwards Ryan Smyth and Milan Hejduk each would reach the 300-goal mark for their NHL careers Sunday night at the Pepsi Center. - Rick Sadowski, Rocky Mountain News

I’d also include Hejduk in Sakic’s class as classiest. Win or lose, Hejduk is the same stand-up guy after a game. He’s a genuinely nice man, who never big-times anybody. He’ll talk to the cub reporter from the local daily Bugle as easily as he’ll talk to me, and give them the same, thoughtful answers. - Adrian Dater, All Things Avs

Amazingly, Gare and Boldirev also notched their 300th goals in the second period (and back-to-back, just like Hejduk and Smyth). In that game nearly 16 years ago, Gare tallied his milestone marker just 48 seconds into the middle frame, while Boldirev scored his at the 1:39 mark. - Craig Stancher, ColoradoAvalanche.com

When Ruslan Salei was sent to the penalty box for the second time in the period, things were starting to look bad again for the Avs — until Smyth came to the fore. The veteran grabbed a loose puck in the neutral zone and beat McElhinney with a wrister to the short side. - Adrian Dater, Denver Post

Michael Cammalleri and Rene Bourque scored for the Flames, who were coming off a Saturday night home loss to Phoenix. It's the first time the team has dropped two straight in regulation since early November. - AP

As for the play of Curtis McElhinney, Keenan also showed some empathy for his little-used goaltender. "The team wasn’t sharp overall," Keenan said. "He had a lot of work in the first period. We responded pretty well after that. (Peter) Budaj did the job for them." Vicki H, Flames Insider

"Yeah, I have a positive record of 1-4 [against the Flames this year]," Budaj said, smiling. "The guys played great. I felt good. I was seeing the puck and I was able to read the play well. I was always in the right position at the right time. A couple times I was swimming, but most of the time I felt pretty good." - Rick Sadowski, Rocky Mountain News

Whether his performance earned back the No. 1 goalie job probably won't be known until Tuesday's practice, but Budaj isn't worried. "It's just good to get a win and help the team out," Budaj said. "I felt good tonight and was seeing the puck pretty well, and the guys did a great job in front of me. We've had some tough times against that team, and so it's nice to come out with the two points against them, finally." Adrian Dater, Denver Post

Defenseman Adam Foote (triceps injury) skated for about 45 minutes Saturday, including a partial participation in team practice. But Foote won't play tonight and probably won't until after the NHL all-star break, coach Tony Granato said. Neither will forward Ian Laperriere (back). . . . Right wing David Jones (back) won't play tonight, but might be ready to return for Wednesday's game against Los Angeles. The same situation applies to center Philippe Dupuis, who is out with an unspecified injury. -  Adrian Dater, Denver Post (before the game)