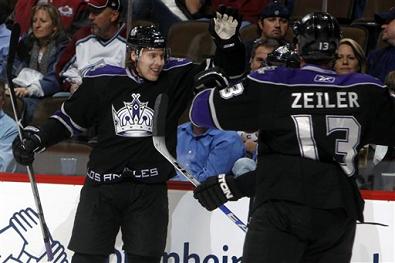 First, a procedural note.  David has managed to seriously injure one of his important appendages (which sounds way more scandalous than "he sprained his wrist") and can't do the recap today.  Sorry.  You'll have to endure my half-assery once again.

In my game preview I warned you that everything I wrote could have been worthless.  As it turns out, it was.  The Avs didn't win, didn't struggle to score, and didn't continue their habit of winning three games in a row.  At least l can admit ahead of time when I'm wrong.

The Avalanche lost 6-5 to one of the least offensive teams in the league through one of the worst collective goaltending performances in team history.  Maybe even league history.  I don't know, but let's just say that to make it seem as bad as it felt last night.

The Los Angeles Kings suck.  Before last night, they had scored only 111 goals and were tied for worst in the Western Conference with the Nashville Predators.  But leave it to Peter Budaj and Andrew Raycroft to let a lousy team light them up.

The second period, though, was a mess.  I'm not sure if Budaj flubbed the words to his intermission prayer or what, but he hit the ice having completely forgotten how to play goalie.  The Kings scored on another power play at 1:24, then thirty seconds later they scored again, when Jack Johnson tallied his first goal of the year (he missed 41 games due to shoulder surgery).  Budaj's meltdown hit a nadir at 5:01 when he allowed Jarret Stoll to score.  Coach Tony Granato had enough and pulled Boots.

In came Andrew Raycroft, he of spit, vinegar and the love of Dater.  TJ Hensick helped him out a little bit when he scored a power play goal at 13:31, but it didn't matter much.  Rayzor gave up two quick goals just a minute later and the Kings found themselves with a nice 6-2 lead.  Chris Stewart managed a goal before the end of the period, which helped, but would eventually prove futile.

Raycroft improved during the third period, stopping all eight shots he faced, and the Brian Willsie and Cody McLeod scored for the Avs, but it just wasn't enough.  Kings goalie Jonathan Quick faced 41 shots and stopped enough of them to eek out the win.  Budaj stopped 11 of 15, and Raycroft stopped 11 of 13.

I suppose I was right about one thing in the preview.  The goalie carousel is here to stay.  It would shock (SHOCK!) me if Granato started Budaj in the Avs' next game, which isn't until next Tuesday against the Sharks (oh god).

Oh, and the Tractor Beam Of Mediocrity has once again pulled the Avs back to .500.