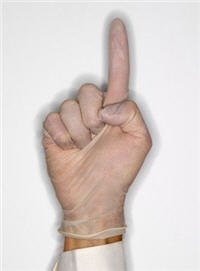 OK, let me see if I have this straight: DD sprained his wrist, and rather than suck it up like a good hockey blogger, he whined to the GM and is on the IR for a day or two, plus Joe is still under the delusion that his continued presence in law school will somehow affect whether he graduates (or not).  What does this mean for me?  I'm left running this train wreck!!  What does that mean for you? I get to phone it in with part 2 of our look back at this year's Avalanche Blogger Roundtable!  Part 1 is here (or scroll down like, two stories, unless you wrist is sprained, then you should probably click the link).

Are the Avalanche overloaded in the pest department? Isn't this cute? We were worried that we had too much grit at the beginning of the season. Who knew we'd never see Scott Parker in an Avs uni again, Per Ledin would languish on the IR in LE, McCormick apparently slept with Granato's wife and then paraded around the house naked since he's NEVER in the lineup, Lappy has missed a good chunk of time with an injury, Guite hasn't had a chance to grow his 'stache due to a bad rib injury, and Cody McLeod thinks that he is, in fact, immortal and a goal scorer.  If the Roundtable (yes, it's a proper noun) was ever going to take a mulligan on a question, this would be the one.  I will point out this gem from our fearless leader, Joe:

I'm starting to think watching Avs games, win or lose, could be a lot of fun again.

What is the most benificial way for the Avs to spend the remainder of their available salary cap space? Should they hold on to it till the deadline? Apparently management is thinking "What available salary cap space?" at this point.  If Joe Sakic sticking his hand in a snow blower, SoS blocking a shot with his forearm, and Tyler Arnason being Tyler Arnason isn't a reason to bring in a center, I don't know what is.  Also, Justin's (from the Avalanche Guild) idea about using the extra dough as incentives to get a game-by-game consistency out of the Avs looks genius to me after watching lackluster efforts for stretches this season.

Budaj has shown the ability to be a #1 goalie in spurts, but has never been able to hold down the starting position for a whole season (for whatever reason). Will he breakthrough this season and subdue any anxiety fans may have?* Long story short: a bunch of us were all sunshine and blue skies, but now everybody is at least overcast and windy.  I think GEO summed it up best, and it still applies:

Will he breakthrough? Maybe. Will he subdue any anxiety that fans may have? Absolutely not.

I think Jibbles' recent post about goaltending and perception is as succinct a sit-rep we have, but I will say this; most of us based our opinions on what we perceived to be a solid defense playing in front of Budaj.  I think we can all agree that there have been more colorful adjective to describe the defense for long stretches this season.

*FYI: For some reason the link back to the Avalanche Guild doesn't seem to have the actual page for that day, so I lifted the content from the website we organized the Roundtable under (on account of my mad web skilz).

While the goal is obviously the Stanley Cup, preseason predictions have the Avs anywhere from 14th(!?!) to 3rd in the West. What's a reasonable goal for the fans to consider the season a success? I personally don't think that there is a direct correlation between "reasonable" and "expectation" among a lot of Avalanche fans this season. That being said, our gaggle of bloggers seemed to fall into the "they'll exceed expectations" camp for the most part, with the exception of super-pessimist Jibbles who predicted a horrible season resulting in Giggy loosing his job.  In reality, the Avs have done neither with the "hovering within sight of .500 at all times" mantra that seems to be infused into the franchise at present.  We all threw around a 95-point playoff barrier and the Avalanche are currently on pace to fall well short of that goal (47 points in 47 games).

Well, there you have it, about a succinct a recap of our horrible prognostication as you're going to get.  There are some things in Avalanche-land that you can hold on to as dependable though: