The Drive to 45 starts with a flat tire 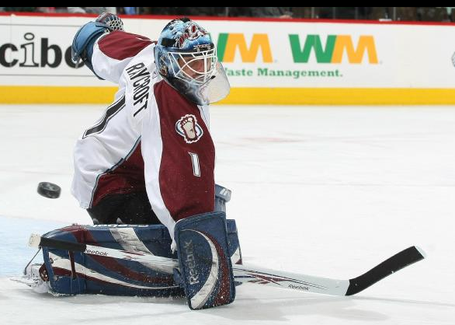 Missed it by THAT much...

The Avalanche have had a bunch of games where they didn't show up and lost. They've also had some games where they've played pretty well...and still lost. This one was the latter. I'm still trying to search for confirmation in my pocket-size NHL rulebook, but I believe both types of losses count the same in the standings.

Colorado played well on the whole - offense, defense and goaltending - but it wasn't good enough. The Sharks scored a couple of goals and the Avs couldn't get any of their 31 shots (9 by Ryan Smyth) past Evgeni Nabokov. Nabby made some sensational saves in the game and rookie defensemen Derek Joslin poked away a loose puck in the crease just milliseconds before Wojtek Wolski could pounce on it to keep the Avs off of the scoreboard.

Milan Michalek scored two goals for the Sharks (he also blocked a shot and had 3 hits on the way to earning the first star of the game). His first goal came as time was winding down on a Scott Hannan penalty. Daniel Tjarnqvist lost his stick and raced to the bench to retrieve a new one. Before he could get back in the play, Christian Erhoff had circled around the net unmolested and found Michalek alone in front. If you've watched any Altitude broadcasts, you'd know that Mike Haynes' pet peeve is that guys who lose their sticks should go right to the bench like Tjarmin did. Although I tend to agree with him, I think that play was a good example of why most guys don't do that.

Eminem's 2nd goal was probably one that Andrew Raycroft should have stopped. It was certainly an excellent shot from Michalek, but Razor has given up too many goals from that spot this year. He got beat twice gloveside against the Kings in a ridiculously short time, and perhaps that was on his mind as Milachek beat him to his stickside.

That was it for the scoring until Patrick Marleau added an empty netter late in the game. The Avs couldn't get anything going on any of their 3 powerplays, and Nabby was simply unbeatable throughout the game. The Avalanche are off to a 1-3 start on this big home trip. Not good, folks. Not good. 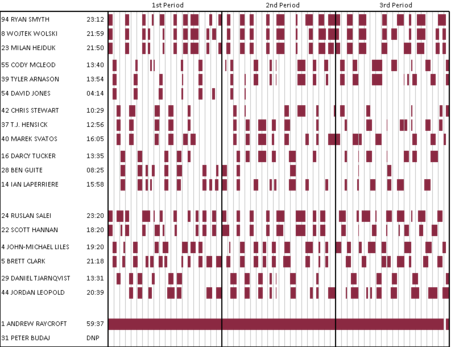 David Jones and Ian Laperriere returned to the lineup (to make room, Brian Willsie was scratched and Chris Durno was sent down to Lake Erie last week). Jones must have had a bullseye on his back - he was crushed twice on the same shift in the first period by Alexei Semenov and then was knocked out of the game early in the 2nd when a check by Doug Murray sent him sliding hard into the boards. I think I read that Cody McCormick is close to being ready to return, so if Jones is out, the Avs may not need to call anyone else up...although I wouldn't mind seeing more of Chris Durno.

The Avs host the Maple Leafs on Thursday and the Ducks on Saturday. As a programming note, I'm going to the Super Bowl this weekend and will be unable to do recaps for either of these games. Hopefully Joe or Mike will be able to pitch in. If not, everyone has the ability to make a recap via a fanpost.

Columbus, Dallas, Minnesota and Anaheim all won. The Blue Jackets beat a Detroit team that was forced to sit two players who skipped the All-Star Game; I'll be sure to send Gary some fan mail if the Jackets beat out the Avs for the final playoff spot by two points. Pheonix and Edmonton both lost big (7-3 and 10-1)

Of the four significant events that happened today, the Avalanche losing to the Sharks was the least shocking. - Shane Giroux, Avs Talk

If the Avalanche had been able to convert its two open-net opportunities Tuesday night, it might have at least come away with a point against the NHL's top-ranked team. Instead, the Avs came away with the same thing they got on those two and every other chance against the San Jose Sharks: nothing. - Adrian Dater, Denver Post

At times the game seemed to be a one-on-one battle between Nabokov and Avalanche forward Ryan Smyth, who fired eight of his nine shots in the first two period. The Sharks goalie had to sprawl all over the ice several times, and his third shutout of the season survived a video review when he but somehow not the puck underneath him was almost entirely in his own net. - David Pollack, Fox Sports

Claude Lemieux received a hardy ovation in his return to Colorado. Lemieux helped the team to a Stanley Cup title in 1996 and remains a fan favorite, his familiar Avalanche sweater popping up around the arena. - AP

"I was disappointed to see that many empty seats," [Lemieux] said. "I've only seen this building sold out. Hopefully, this was just an off night. I'm used to seeing this place rocking and loud. - Rick Sadowski, Rocky Mountain News

Known for his vicious hits, Lemieux was rather tame on Tuesday in his second game for San Jose. He checked Darcy Tucker into the boards and had a bump on Jordan Leopold, but that's about it. - Pat Graham, AP

"We've got our fingers crossed that it [Jones' injury] is nothing big," Avalanche coach Tony Granato said. "He's a horse for us and has played really solid all year. He's one of the young guys that adds a lot of energy." - Rick Sadowski, Rocky Mountain News

Avalanche center Paul Stastny resumed skating Tuesday, and although there is a chance he could return to the lineup sooner than forecast from a broken forearm, the team is proceeding as if he will miss at least another couple of weeks. - Adrian Dater, Denver Post