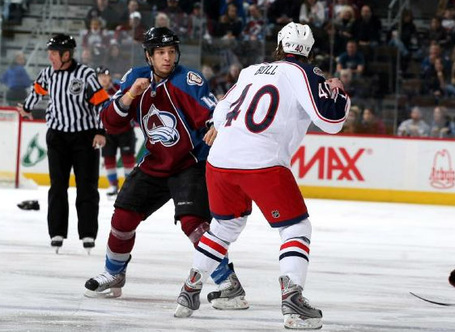 The Avs showed a lot of fight...for about 20 minutes

Well, so much for being in the top 8 in the conference. The Avalanche were completely embarrassed by the Columbus Blue Jackets last night, 6-1. With the win, the BJs moved past the Avs into 8th. Frankly, based on their play last night, they deserve it.

Like so many recent games, the Avalanche came out with a lot of early jump. Chris Stewart fought with Jared Boll early in the game. He kicked butt, and that helped set the early tone. The Avs had a couple of early powerplays, and Darcy Tucker scored late in the 1st period to give the Avs a 1-0 lead at the first intermission.

And that does it for the positives column.

The 2nd period was marked by domination from the Columbus line of Rick Nash, Manny Malhotra and Kristian Huselius. Huselius was fed twice by gorgeous bang-bang passes from Nash. On the first goal, at the 2:28 mark, the puck was in the net before Peter Budaj reacted. The line was causing all kinds of fits for the Avalanche defensemen - especially Adam Foote who was called for interference on Nash and was on the ice for all three of the lines' goals.

Well, except for one - a Nash penalty shot. That shot was awarded when Brett Clark hooked Nash from behind on a breakaway. It was controversial, as it appeared that the play was just going to result in a delayed penalty. Play continued for some time before being whistled down (Nash had even gone off on a line change) when the Avs finally touched the puck it was time for a TV timeout. When we came backf rom the break, instead of the obligatory camera shot of Clark in the penalty box, we were instead greeted by one of an incensed Tony Granato on the bench. After that long stretch of play, Nash was awarded a penalty shot. He promptly buried it for what would turn out to be the game winner. The homers covering the Blue Jackets were under the impression that plays get whistled down immediately for a penalty shot, and I thought the same thing. Turns out, that's not the case.

25.7 Timing - If the foul upon which the penalty shot is based occurs
during actual playing time, the penalty shot shall be awarded and
taken immediately in the usual manner notwithstanding any delay
occasioned by a slow whistle by the Referee to allow play to continue
until the attacking side has lost possession of the puck to the
defending side, which delay results in the expiry of the regular playing
time in any period.

At any rate, the Avs were already sliding downhill and once the penalty shot happened they became completely unraveled. The only thing the Avalanche were able to do the rest of the game was hit people. All other aspects of the game - offense, defense and goaltending - were completely abandoned. It was gruesome. If you really want to re-live it, the video highlights are included below.

Hey Tony, if you are going to continue to pull Arnason off the first line (a good move, in my opinion) why not do it from the start of the game? Why wait until the 2nd period?

Granato has been rather Quenneville-esque in the way he's throwing all his lines into a blender each night. One of the oddest combinations to fall out in the 3rd period: David Jones skating with Ryan Smyth and Milan Hejduk for 4 shifts.

The Avs host the Minnesota Wild on Sunday - the first NW matchup for the Avs since December 7th. The Wild beat San Jose on Wednesday, but have been sluggish overall lately. Since we beat them 6-5 on December 1st, the Wild are 4-8-1.

The Avalanche dominated the opening period, then went dormant, much to the dismay of coach Tony Granato. "We lost the game in the second period," he said. "That pretty much sums it up." - Pat Graham, AP (Rocky Mountain News)

"We weren't prepared for the competitive level at the start of the game," Blue Jackets coach Ken Hitchcock said. "But we really adjusted. We played our game in the second and third period. We played very, very well." - Aaron Portzline, Columbus Dispatch

Peter Budaj just isn’t a No. 1 goalie. Sorry, Boods backers, but he’s not good enough. Period. He’s a good kid and I hate to keep knocking him, but he’s not good enough. He’s just not. Don’t give me any “Aww, the D didn’t play that great in front of him and it’s not his fault and blah blah blah.” He was awful tonight, and he’s lost four of his last six starts. Not good enough, sorry. I wish I could say different. But I can’t. - Adrian Dater, All Things Avs

Huselius had his first multi-goal game of the season, scoring both times on pinpoint passes from Nash. After being held pointless for five games in mid-December, Huselius has three goals and three assists over his past eight games. - AP