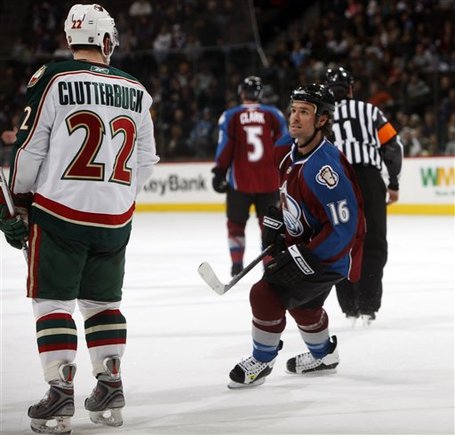 Darcy Tucker seals the game for the Wild with stupidity, tenacity and a whole lot of crazy.

Well, folks, what can I say? We've been complaining that the Avs haven't been punching in for a full 60 minutes lately. Tonight, the effort was there...but it didn't do any good. The Avalanche still lost. Niklas Backstrom improved to 5-1 all-time at the Pepsi Center (if the stat I saw flashed during the game was correct) and the Avs fell to 11th in the conference and, once again, to last place in the NW division.

There aren't a lot of positives about losing 3 straight - two at home - and scoring a grand total of two goals in the process. The Avalanche offense continues to be as anemic as ever. But, at least the effort was there. A lot of players had good games, including Tyler Arnason and Marek Svatos. The Avs put up 33 shots on Backstrom and it wasn't just one line doing all the work; David Jones was the only forward without a shot on net.

Backstrom, of course, was terrific. There have been low scoring games by the Avs where the opposing goalie could mail it in. This wasn't one of them. Backstrom made a bunch of good saves in the game. Colorado had a bunch of scoring chances and, with a couple of lucky bounces, could have potted a couple of goals.

At the other end, Peter Budaj was also strong. He turned aside 35 shots and he was indeed the team's best penalty killer on a number of occasions. The Wild got two by him about 3 minutes apart, both by Owen Nolan. The first was a deflection of a Brent Burns point shot and the second was a fluky bounce off of Chris Stewart's skate that landed right on Nolan's stick. The first one was probably stoppable, but the second was just a goal that happens.

One big negative for the 2nd straight game was some undisciplined play by the Avalanche players. Adam Foote losing his cool against Rick Nash was a major factor in the Columbus game, and his idiotic roughing penalty on Cal Clutterbuck early in this game was every bit as stupid...and it led to the game winning goal. I know Foote often plays on the edge, but he needs to be smarter than that. It sounds like he'll have some time to find his zen, unfortunately; he suffered an arm injury in the game and left early in the second period.

Foote wasn't the only Avalanche player without a brain tonight. Darcy Tucker...I just don't know what to say. He's already playing bad hockey to begin with; he loses pucks along the boards and spends more time getting knocked on his ass than any player in history. And then you take on a boneheaded charging penalty in the 2nd, killing some nice momentum the Avs were working on at the time. In a normal world, you'd be watching the rest of the game from the bench. Nope. With just about two minutes to go in the game, Granato looked down his bench. Smyth, Wolski and Svatos had just come off the ice. Hejduk had been out there recently too. Everyone else is rested. Granato tapped Arnason and Stewart (who had a monster shift on the previous shift, moments after taking a puck to the leg and limping off the ice). He needed one more guy, so he looks past Hensick, Jones, Lappy (who had been benched since his own stupid penalty late in the 2nd), McLeod, Willsie, Cloutier, the guy selling peanutes...and settles on Darcy Tucker. Tucker rewards Granato's confidence by immediately drawing a holding the stick penalty and -  just to make sure everyone was aware that Tucker doesn't give a shit about this team - took off after Clutterbuck to get another 10 minutes tacked on. Tucker very easily could have gotten a second minor penalty on the play (to put the Avs on a 5 on 3) or landed an instigator penalty (giving Granato an automatic suspension). Even with just the one minor penalty (plus the misconduct) he killed off any chance his team had at coming back. I'm reasonably sure they wouldn't have been successful, but that's besides the point. That is just dumb.

Tucker has proven throughout his career that he doesn't know any better. Foote and Laperriere do - they need to start setting GOOD examples and cut out the stupid crap.

There were a bunch of penalties in the first period, and that caused some havoc with Granato's new lines. Hejduk didn't last very long at left wing. By my count he had 3 even strength shifts before he shifted back to the right side and he and Wolski moved up to the Smyth line. So, in the end, the lines looked more like this:

As you know, Brian Willsie was so urgently needed that Tony Granato scratched Ben "Our Only Faceoff Guy" Guite. Willsie played just 6 minutes and had just 4 shifts after the first period.

The Avs are in Cody McCormick's favorite city to play in (Nashville) on Thursday and then close out the first half of the season with a visit by the Blackhawks on Thursday.

Scrambling all four of the Avalanche’s forward line combinations didn’t result in the most important change of all – the bottom line. Rick Sadowski, Rocky Mountain News.

Despite a reasonable number of shots, the Avs did not make life very difficult for Backstrom. Aside from a Wojtek Wolski short-handed partial breakaway in the second period and a late-game Chris Stewart doorstep chance, the Avs had precious little in the way of dangerous scoring opportunities. - Adrian Dater, Denver Post.

It's the first time in 61 regular season and playoff games the Wild has held Colorado scoreless. - AP

It's nice to see the Wild get the early lead, but I'm still a bit bothered by the 32 shots they gave up to a team missing three centers - Nathan Eide, Hockey Wilderness

For Nolan, it was his first two-goal game since Feb. 9, 2008, and he had multiple chances for his 12th career hat trick. Nolan has 18 goals against Colorado, fourth-most against any opponent. - Mike Russo, Star Tribune

The eyes now must turn to GM Francois Giguere, in my opinion. He should go out and get a center, somebody who can win faceoffs, play some defense and maybe chip in with the odd goal. Oh, what’s that you say? Yes, that’s right, the Avs could have had this kind of guy this past SUMMER, when I IMPLORED them to go get Stephane Yelle back. - Adrian Dater, All Things Avs

Francois Giguere made many questionable moves this offseason but letting Theodore walk was not one of those moves. - Shane Giroux, Avs Talk