The Avs win a season series...and find a new center 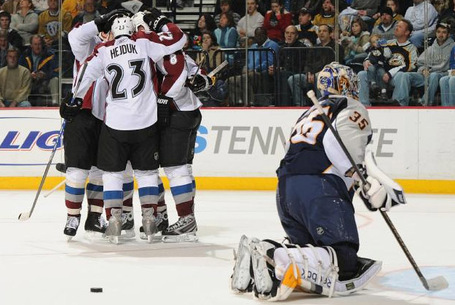 Hejduk, Wolski and friends engage in a well-deserved man hug

Sakic. Stastny. Laperriere. McCormick. Guite. Five of the six centers the Avs started the season with were out last night due to injury or illness. With all those pivot men on the shelf, the Avalanche went with old standby Tyler Arnason along with Philippe Dupuis, TJ Hensick and, on the top line, Wojtek Wolski.

It worked out okay. Wolski had six of the Avs' 21 shots and scored both of Colorado's goals as the Avs edged out the Predators 2-1. The Wolski experiment has only been running for two games, but so far it looks like a hit; Double Dub looks infinitely more comfortable playing up the middle. On both goals, he went hard to the net and was ready when Milan Hejduk fed him two beauties of passes from the left wing boards. It's still early, but so far it looks like this one is going to be a good move.

Andrew Raycroft got the start in net, and won again to improve to 7-1 which will no doubt throw some more wood on the smoldering goalie controversy fire. Raycroft wasn't exceptional, but he didn't have to be. His defense - even without Adam Foote - played excellent in front of him all night. They blocked all kinds of shots (23) and got the puck out of the zone quickly. It was one of the better defensive performances of the year for the team. Razor also got a little lucky, with at least 3 shots hitting iron behind him. He got the win, though, and that's what matters. It's hard to rain on the parade of a guy who is 7-1.

The good news is that Wolski's line looked great, the defense looked solid, and the PK was extremely effective. Also, although there weren't a lot of hits recorded officially (just 13 for Colorado), it seemed like the Avs were committed to finishing checks throughout the lineup, even guys like Hensick who normally don't dig that sort of thing. The bad news? Offensively, it was slim pickin's after the first line. Smyth, Wolksi and Hejduk accounted for more than half of Colorado's shots. Philippe Dupuis had 3 shots. The other 8 forwards? 3. Ouch.

Apparently, Ben Guite is sick, which is why the Avs had to call up (and play) Dupuis. To make room for Dupuis, the Avs had to place either Laperriere or Foote on the IR, and Foote got the nod. That means he'll at least miss the next two games.

Game 41 is Thursday, with the 'Stachehawks visiting Denver.

Andrew Raycroft's goals-against average and save percentage still aren't impressive, but his record sure is.After the veteran goalie had 22 saves in Colorado's 2-1 victory over Nashville on Tuesday, and was especially staunch when the Predators could have taken command in the first period, Raycroft is 7-1 for the season and again seemingly helping create an, ahem, "goaltending controversy." - Terry Frei, Denver Post

This is what Avalanche coach Tony Granato had in mind when, as the injuries mounted, he decided to give Wojtek Wolski a shot at centering Colorado's first line between Ryan Smyth and Milan Hejduk. - Terry Frei, Denver Post

A center for much of his junior career, the 22-year-old Wolski appears ready to make the transition from left wing as the Avalanche tries to find a suitable replacement for Sakic and Stastny. - Aaron J Lopez, Rocky Mountain News

In other injury news, Stastny, who had surgery on his broken right forearm Dec. 30, has resumed workouts at the team's practice facility, but Granato said he still is expected to be out until at least mid-February. - Aaron J Lopez, Rocky Mountain News

Nashville lost its fifth straight. The team has scored just seven goals in that stretch and sits at the bottom of the Western Conference with just 94 goals this season. - Jessica Bliss, Tenesseean