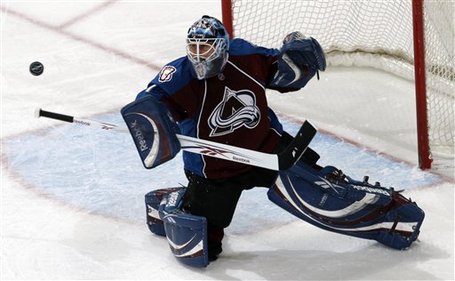 Raycroft turns aside 43 shots to get the win

It took three tries, but the Avs finally managed to beat former coach Joel Quenneville and his pesky Blackhawks club, eeking out their 2nd straight 2-1 win over a Central division opponent.

Once again, ALL of the Avalanche offense came from the first line. Ryan Smyth scored a controversial goal in the first off of his skate (seriously, is there any reason a player shouldn't be allowed to kick the puck in?) and Wojtek Wolski scored a controversial goal in the 3rd (Patrick Sharp was lollygagging and wasn't in the circle when the lineseman dropped the puck, and the 'Stachehawks took a penalty on the ensuing play). And that was it. Because of Andrew Raycroft, it was enough, but the Avs haven't gotten a goal from another line since January 2nd. Someone needs to step up. Quickly.

The main story in the game was indeed Raycroft, who turned aside 43 shots to give the Avs the win (and to improve his own record to 8-1). Raycroft has not always looked strong in victory, but last night he was terrific and has earned an opportunity to continue to start. He is the polar opposite of Peter Budaj - he uses agility and reflexes where Budaj relies on positioning and anticipation. Maybe the Avs simply need more of the former.

I think most readers know that Joe, myself and Mike all favor Budaj over Raycroft. I think many of our readers - especially our core group of commenters - share that sentiment. However, this is not the Peter Budaj Blog; it's an Avalanche blog. I appreciate that it's fun to debate the respective merits of our current and former goaltenders, but I fear that the MHH comment system is developing an "us against them" mentality where only Budaj Backers feel welcome. Just so we're clear: ALL Avalanche fans are welcome to comment here, as are fans of other teams who can keep it respectful. I don't spend a ton of time in the game threads, so maybe I'm missing something here, but looking back at the last couple of them it seemed like there was a lot of negativity aimed at some newer folks. I'm not asking for a chorus of Kumbaya or anything, just a bit more...civility (if that's a word). Okay, soap box rant is over.

The lines were unchanged last night. I think Philippe Dupuis and Chris Stewart have been our two best forwards beyond the Wolski line in the last two games. But Dupuis needs to change his number - the "5" in 59 looks too much like a "3" - so, every time he hits someone I nearly fall out of my chair thinking it's Tyler Arnason.

The Avs welcome the other, probably unrelated Dupuis into town on Saturday. The Penguins are struggling mightily (1-6 going back to December 27th), which never seems to bode well for Colorado. One bright side: the Avs are 7-0 on Saturday so far this year. Yes, really.

Quenneville was still steamed after the game, after what he thought was a quick drop of the puck by a linesman before the Avs went on the power play in the third. "It was a homer drop," he said. "I haven't seen that in four years. That changed everything right there." - Adrian Dater, Denver Post

Obviously the big story of this game is the odd faceoff towards the end of the game.  Hawks were in position.. Avs came in slow.. Sharp skates away to talk to Khabby.. Linesmen blows his whistle and drops the puck.  I don't even know if Sharp was back in the circle yet. Off the drop the Hawks take a penalty.. Avs score the winner on the power play.  womp womp - Chicagokill, Second City Hockey

Raycroft’s previous high in saves was 40 set on Nov. 6, 2006 vs. Philadelphia ... Raycroft improved to 8-1-0 on the season, becoming just the second goaltender in franchise history to open a season by winning eight of his first nine decisions - AP

Like Jose Theodore before him, Rayzor is now offering testimony for the Church of Hack. Hackett’s constant preaching of the fundamentals, on and off the ice, has gotten Rayzor to start believing in himself again, now that he’s seeing results. One thing Rayzor said was Hackett has gotten him to better his footwork - and it’s clearly better now than it was early in the season. - Adrian Dater, All Things Avs

For whatever reason, the team plays better when Raycroft is in net. In his eight starts, the Avs have scored 5 goals three times, four goals once, three goals once, and two goals in the other three games. Six of the games have been one-goal victories for the Avs. - GEO, The Avslova Factor

The Hawks had chance after chance to get the puck past Avalanche goalie Andrew Raycroft -- especially in the third period, when they put 19 shots on net -- but Raycroft was up to the challenge, making 43 saves. - Len Ziehm, Chicago Sun-Times

"We had a lot of chances," Kane said. "[Raycroft] made some big saves. Toward the end of the game it seemed like we couldn't really hit the net. It's a team we should beat, we know it. It's tough to lose a game like that." - Chris Kuc, Chicago Tribune

Coach Tony Granato wouldn't say Raycroft, a former Calder Trophy winner, has supplanted Budaj as his top goalie, even if he has won eight of nine decisions this season and is expected to start again Saturday against Pittsburgh. - Rick Sadowski, Rocky Mountain News

Wojtek Wolski has been a friggin' superhero since being moved to center. - Shane Giroux, Colorado Avalanche Talk

Wolski does not consider his first three seasons, played almost exclusively at left wing, a waste. But he clearly feels he is at the place where he can best help the Avs win now. - Adrian Dater, Denver Post