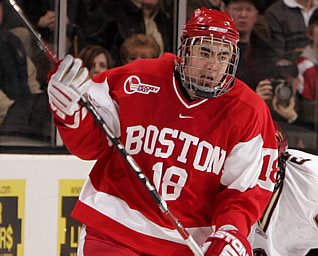 A look back at the news and events for Avs prospects for the week of October 4th through October 10th.  In this week’s edition, we highlight the disappointing home opener for the Lake Erie Monsters, the unfurling of the championship banner for Boston University and an update on Brandon Yip.

The Lake Erie Monsters had a pair of losses this week.  On Friday, they fell 5-2 in Rochester to the Amerks.  Chris Durno and Brian Fahey each scored their first goals of the season.  It was also the AHL debut of Trevor Cann, who made 15 saves in the game.  Despite the loss, it appears Cann has won the backup position for now, as Billy Sauer was reassigned to Charlotte (ECHL) earlier in the week.

Saturday’s game was a tougher pill to swallow.  The Monsters were only able to muster 16 shots on goal during their home opener.  Tyler Weiman did all he could, making 24 saves in the game.  The Monsters will continue a four game home stand this week.

It was reported last week that Brandon Yip (pictured) will miss time due to a broken hand.  The incident occurred in a preseason game against the St. Louis Blues.  I was told by a Monsters season ticket holder that Yip’s hand wasn’t broken, but had torn ligaments.  It appears he’ll miss about two months.

In Ontario, Cameron Gaunce continues to look for his first goal of the season, whereas Brandon Maxwell may be in a fight for the starting goaltending position in Kitchener.   As we shift to Quebec, the Remparts faced the Lewiston MAINEiacs last Sunday.  Peter Delmas didn’t fare to well against his former team as he has yet to take off in Quebec.  In the WHL Stefan Elliott is having solid start offensively to the season with seven points in nine games.

The NCAA dropped the puck this weekend, and while Boston University will wait another week to open the regular season, they took time on Saturday for one last celebration.  The Terriers national championship banner was unfurled prior to an exhibition game against the US Under-18 team.  In North Dakota, the Fighting Sioux swept a two game set against Merrimack.  Look for Brad Malone to center the second line to start the season for North Dakota.

In the United States Hockey League, Nate Condon scored his first goal of the season.  The Fargo Force are off to a 1-2 start on the young season.

After scoring 12 goals in 48 games last year, Denis Parshin has seven in his first 12 games for CSKA.

In next week’s edition, we’ll cover the Lake Erie Monsters and the start of the regular season for the Minnesota Gophers and Boston University Terriers.  Until next time!