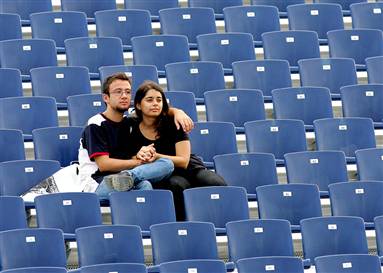 October 16, 2006 - Martin Lapointe scores two goals and Martin Havlat adds two assists as the Chicago Blackhawks beat the Colorado Avalanche in Denver 5-3. This game is notable not for the feats of the Martins, or for the game's 2nd star (Tyler Arnason). Official attendance for the game was 17,681, ending the Avs' sellout streak at 487 games. It was the first non-sellout in Denver since November 1st, 1995.

Overall, attendance from the Chicago game through the Vancouver game this year has averaged 16,429 (91%). Perhaps we shouldn't be making fun of Nashville after all?